Huge eyeball from unknown creature washes up on beach

A giant eyeball from a mysterious sea creature has  washed ashore at Pompano Beach, Florida. 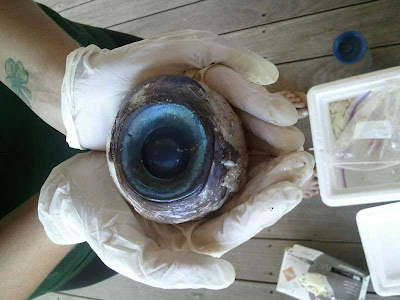 No one knows what species the huge eyeball came from, but whatever it is, it has blue eyes and has to be big enough to have eyeballs bigger than softballs. Among the possibilities being discussed are a giant squid, some other large fish or a whale or other large marine mammal.

A man spotted the eyeball on Wednesday and reported it to the Florida Fish and Wildlife Conservation Commission. "He was walking along the beach and found it and thought it looked like something cool," said Carli Segelson, spokeswoman for the commission. 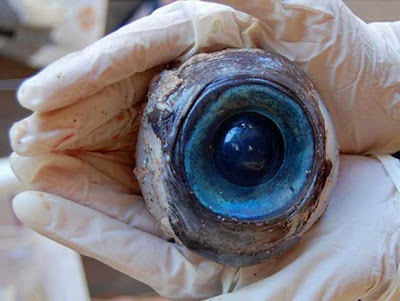 Wildlife officers placed the eyeball on ice. It will be preserved in formalin and sent for analysis to the Florida Fish and Wildlife Research Institute in St. Petersburg.
Posted by arbroath at 6:05 am
Email ThisBlogThis!Share to TwitterShare to Facebook

It's kind of beautiful.

Octopus eyes can be pretty huge.

many lives that have not been recorded in encyklopedia