A stuntman has told how he nearly burned to death while tied down at a show in Germany – as assistants fought the flames with fire extinguishers that did not work. "I've been in a coma three times before, but it's never been so close," he said afterwards. Heiko von der Schlippen was set on fire and dragged along the ground by a van at a live show in front of around 200 spectators in Cologne. 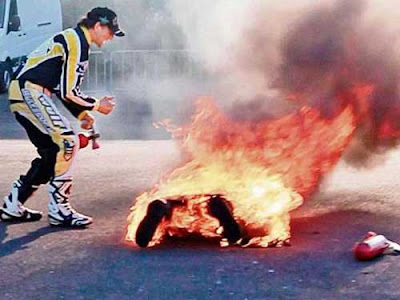 But when the tow rope was released and the support team moved in to put out the fireball the petrol-soaked stuntman had become, their fire extinguishers failed and panic broke out. "I couldn't get up, because I was tied up, while it got hotter and hotter," he said. "I felt the helmet melt and merge with my face,” he said. Wearing a fireproof suit and helmet, von der Schlippen had been strapped facedown to a metal stretcher, doused with petrol, and set alight before a van dragged him along the ground.

He had personally checked the fire extinguishers before the stunt, which he had reportedly performed several times before. "They were still working then," the 43-year-old said. But panic broke out among his assistants as they aimed their fire extinguishers at him but nothing came out. As the fireball continued blazing longer than planned, von der Schlippen tried to wriggle himself free, while the show's MC desperately called for help through the PA system.

A back-up fire extinguisher was finally found and von der Schlippen was put out after having been ablaze for 45 seconds.  The suit would have started to melt if he had been left a few seconds longer. He escaped with a few facial burns, but was otherwise unharmed. He was able to attend a benefit event for a 15-year-old burns victim on Sunday. "Now I know how the boy must have felt," he said. "It is hell."
Posted by arbroath at 6:02 am
Email ThisBlogThis!Share to TwitterShare to Facebook