An unlikely family was found abandoned in front of the Terrell Animal Shelter in Dallas, Texas, which was closed for the Fourth of July holiday. Someone tied a black Chihuahua mix to a pole in front of the shelter and left a box next to her.

“I looked and saw two little balls of fur with her and I thought it was a couple puppies,” said Officer Steven Johns, who saw the dog and took the three animals to the shelter and gave them food and water. I went to move them into a cage and moved the mama dog out of the way; much to my surprise mama dog is nursing two kittens instead of two puppies,” he said. 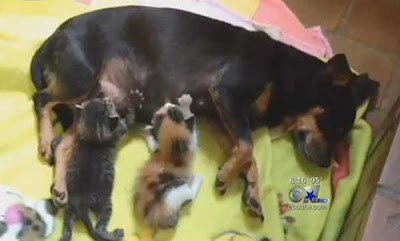 The mama dog kept a close eye on the officer as he moved her adopted babies, who were days-old kittens. The unusual family caught the eye of Deborah Franklin, a foster mother with Paws Patrol Animal Rescue. “She’d want to come to you and she’d look at the babies and it’s like, ‘I can’t leave them,’ and I thought, ‘Now, listen, that little dog deserves a good home,’” she said.

The dog and her 12-day-old orphaned kittens are settling into Franklin’s home where mama dog keeps a close eye on her little ones, responding to their cries, cleaning them and even nursing them. “She didn’t care what species it was. All she knew, she was a mother and these were babies and they needed her,” said Franklin. All three are being nursed back to health as they await permanent homes.