Dozens of swimmers braved murky waters on Sunday as an 18-year-old woman smashed the world record time for bog snorkelling. The 28th World Bog Snorkelling Championships saw 130 competitors from around the world, some in fancy dress, descend on Waen Rhydd Bog on the outskirts of Llanwrtyd Wells, Powys, mid Wales. 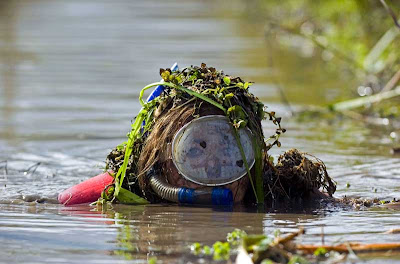 Winner Dineka Maguire, from Northern Ireland, beat the previous best time by just over a second when she swam two lengths of the 55-metre (180ft) trench in one minute and 23.13 seconds.

Bob Greenough, one of the competition's organisers, said: "Dineka has been competing for six years but this is her first year as a senior. I couldn't believe her time. "We have the serious athletes, who want to prove to their friends they can do it, and people in fancy dress. Part of the fun is making a fool of yourself. One competitor was from Sweden and we had lots from Australia and New Zealand.

"Because the competitors can only use dog paddle, it's all about leg power." Run by a team of volunteers, the annual competition is part of a roster of eccentric events held throughout the year at Llanwrtyd Wells, the UK's smallest town, in Powys, mid Wales. It also hosts the Man Versus Horse Marathon and a bog snorkelling triathlon, which includes a seven-and-a-half mile run and a 19-mile bike ride, as well as two lengths of the infamous bog.
Posted by arbroath at 6:01 am
Email ThisBlogThis!Share to TwitterShare to Facebook