Spanish firefighters were called to rescue a half-naked, 21-year-old woman on Friday who was suffering from shock and hypothermia after falling into a 15-metre deep well shaft while having sex.

The Ciudad Real woman had been having sexual relations with a man when the cover of the well shaft became dislodged. She plunged 10 metres into the hole near 'Playa Park' – a waterpark popular with local youths as a venue for romantic liaisons and 'botellón' outdoor drinking parties – before hitting the water. 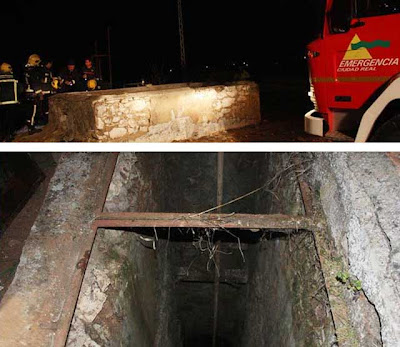 It is believed that the couple had inadvertently loosened the boards covering the well while making love and had been too distracted to notice the impending peril. Instead of trying to rescue his unfortunate partner, her partner hitched up his trousers and fled the scene. Emergency services later received an anonymous call which they believe was made by him but he did not return to the scene of the accident.

When firefighters rescued the woman she was found to be soaking wet and wearing no underwear. She was taken at midnight to Ciudad Real general hospital to be treated for symptoms of hypothermia before being discharged at 10am the following morning. Firefighters issued a public statement on Friday asking young people in the area to take care while partying as there are a number of covered well shafts in the area similar to the one used for the hapless couple's doomed tryst.
Posted by arbroath at 6:03 am
Email ThisBlogThis!Share to TwitterShare to Facebook