Puppy camped out in operating room during surgery on cheetah companion

A male cheetah cub at the San Diego Zoo Safari Park is expected to make a full recovery after surgery thanks, in part, to his faithful puppy companion. 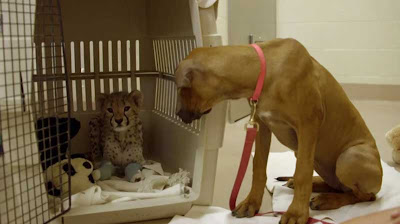 Ruuxa, the cheetah cub, was recently diagnosed with a growth abnormality in his forelegs and had to undergo surgery to correct the problem. “This is a condition occasionally seen in domestic dogs and, if not treated, can cause pain and problems with the animal’s ability to walk later in life,” said Jeff Zuba, senior veterinarian.

Raina, a Rhodesian ridgeback puppy, accompanied him to the veterinary hospital and waited nearby throughout the entire procedure. She sat by Ruuxa’s side until he came out of his sedation. “Raina appeared very concerned about Ruuxa when she saw he was sleeping and she couldn’t wake him,” said Susie Ekard, animal training manager, Safari Park.

“She licked him and nuzzled him, and when he awoke, she lay with him and seemed very content to know her cheetah was okay.” The two have been constant companions since being paired together at four and five weeks of age.
Posted by arbroath at 6:05 am
Email ThisBlogThis!Share to TwitterShare to Facebook