A scorpion has been rescued after it was found by staff in an Edinburgh office. Workers at the Dog Aid Society of Scotland contained the creature by putting a glass over it until animal welfare experts arrived. The Scottish SPCA collected it from the office on Blackford Avenue after it was spotted on Thursday. 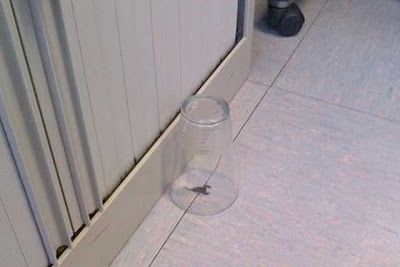 The scorpion was taken to Edinburgh Butterfly and Insect World, where it will remain. Experts have still to identify the species of scorpion, which is around the size of a 10-pence piece. Usually the smaller the scorpion, the more venomous they are. Steph Grant, Scottish SPCA animal rescue officer, said: "It's a bit of a mystery as to how the scorpion came to be there.

"We've had instances in the past where we've rescued exotic spiders and scorpions found in boxes of fruit originating from overseas, but the people who work in the office haven't had any fruit deliveries and can't imagine where it has come from. Blackford is a residential area, so there is a chance the scorpion is someone's pet which has gone missing. 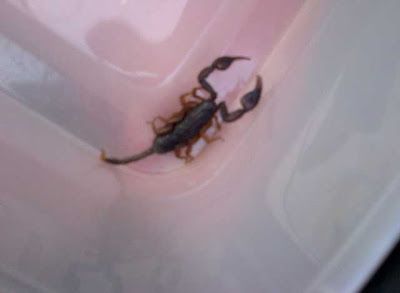 "Office staff managed to contain the scorpion by putting a glass over it but were understandably quite frightened by their little visitor. It was cold when I arrived but once it warmed up it became more lively." It is likely that the creature is a young scorpion which still has to grow.
Posted by arbroath at 6:01 am
Email ThisBlogThis!Share to TwitterShare to Facebook