A man was arrested after allegedly assaulting his wife in Lowell, Massachusetts, on Monday. Patrick Manjong, 39, has been charged with assault and battery with a dangerous weapon - a waffle with syrup.

Police say they responded to an address at 5 pm for a report of a domestic assault in progress. The victim, Manjong's wife of eight years, told police that while she was making waffles for dinner, she and her husband began arguing about how waffles dripping with syrup are unhealthy to eat. 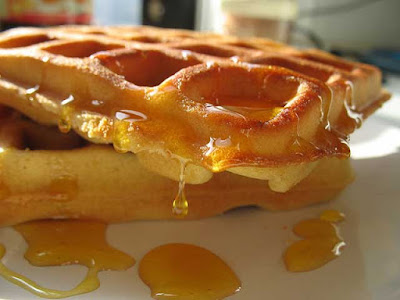 The victim told police that Manjong became so irate that he grabbed a waffle with syrup and slapped her across the face with it, according to court documents. Officers did notice pieces of waffle were stuck to the victim's face and hair.

Manjong appeared in Lowell District Court on Tuesday to plead not guilty to the assault charge. He was released without bail so he was able to make the couple's divorce hearing on Wednesday. His next court date is scheduled for June 11. Meanwhile, he was ordered not to abuse the victim.
Posted by arbroath at 6:06 am
Email ThisBlogThis!Share to TwitterShare to Facebook