A woman travelling along a street in Youngstown, Ohio, ended up driving her car up a guide wire to a utility pole. 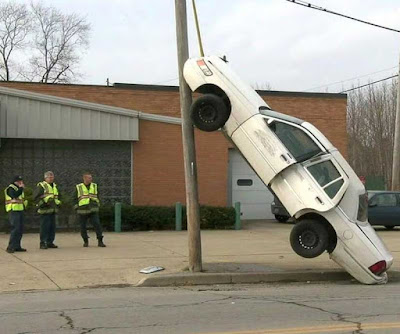 The driver, Amber Johnson, said she turned around for a second to give her 2-year-old child a snack and hit the wire. The car went up the guide wire, resting vertically. 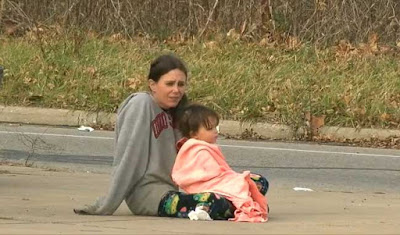 Ms Johnson, 30, was able to exit the vehicle and get help. She and her child were not injured. It took two wreckers to get the car down. Ohio Edison was also called to the scene to fix the damaged wires. Ms Johnson was not given a citation by police.
Posted by arbroath at 6:06 am
Email ThisBlogThis!Share to TwitterShare to Facebook

It's lucky the wire was there, otherwise she'd have driven head first into the utility pole instead.

No citation? Obviously she swerved onto the sidewalk through not paying attention to the road, what if somebody had been standing there?

I think the humiliation might be more punishment than any citation could provide.* She _really_ did not do the stereotype of "women drivers" any good here.

*Obviously if she had hurt anyone, there would've been no choice in the matter--she'd've been cited.

BS. She was texting, guaranteed. Kids can't keep their faces out of those stupid phones for five seconds.