Woman surprised when turtle crashed through her car's windscreen

A woman was surprised when a turtle crashed through her windshield on a Florida highway. The turtle was propelled through the air on I-4 in Deltona and crashed into Nicole Marie Bjanes' windshield as she was driving at about 75 miles an hour on Monday afternoon. 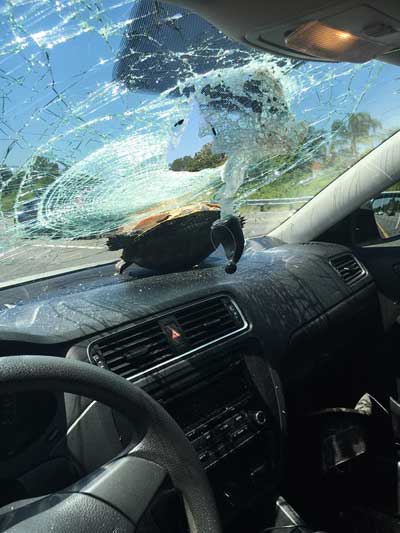 Miraculously, the turtle and the driver both walked and, in one case, swam away mostly unscathed. Florida Highway Patrol officers responding to the scene explained, “A vehicle in front [of Bjanes’ car] ran over the turtle. The turtle was thrown airborne and struck the windshield ... shattering it.” 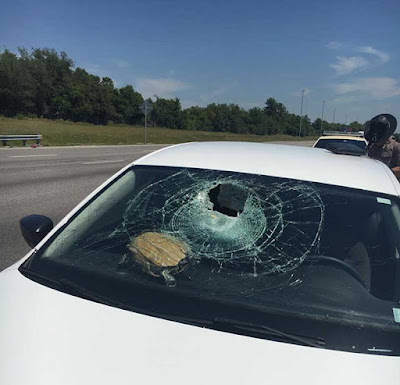 Bjanes said she saw the debris in the road, but did not realize it was actually a turtle. The reptile came flying through her windshield, bounced off the passenger seat, and then landed on her dashboard.

She was treated at the scene for minor cuts by EMS. According to FHP Sgt. Kim Montes, the turtle was placed in a pond adjacent to the interstate and swam away unharmed. The car's windshield has since been fixed as well.
Posted by arbroath at 6:05 am
Email ThisBlogThis!Share to TwitterShare to Facebook

Obviously it's a ninja turtle...