Police were called after an unusual and dangerous chase across a beauty spot in Stroud, Gloucestershire. Three elderly people were seen off-roading across Minchinhampton Common, luring cattle behind them with carrots. One woman was sitting in the boot, dangling out of the back of the car, said Nailsworth resident Ali Elderfield.

“They were literally off-roading in a Micra and the boot was open with this woman sat in there, laughing and holding carrots out for the cows, but the cows chased as the car drove over the grass. The driver was near the road, all the cows then started running in the road. The man driving and woman is passenger seat all looked like they were in their 60s and were all laughing. 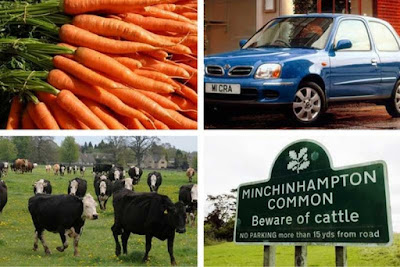 “The cows looked distressed too as they were swinging their heads around and running right by the car. It's really dangerous." The Micra was around 12 years old and dark blue. Around 300 cattle, a small number of horses and a donkey called Alfie roam the commons freely under ancient commoners' rights. The commons are administered by the National Trust and most vehicles are not allowed to venture more than 15 yards off the road.

Hayward Mark Dawkins, who cares for the animals on the two commons, said cattle like to eat carrots but the public should not feed them. “They like carrots but this is a very curious incident," said Mr Dawkins. He confirmed that this year, six cattle had died in collisions with vehicles on the unfenced commons of Rodborough and Minchinhampton. The cattle will be taken off the commons at the end of October and will return next May.
Posted by arbroath at 6:01 am
Email ThisBlogThis!Share to TwitterShare to Facebook