Cincinnati police arrested a St. Paris man who was running naked in Sunday's Flying Pig Marathon and Tased him when he wouldn't comply with their orders to stop. Police charged Brett S. Henderson, 35, with public indecency and obstructing official business. Police say Henderson was told to exit the race and get in a police car but he refused, running around an officer and continuing to run in the race. Eventually, Henderson was instructed by police to get in a car or he would be Tased. Henderson kept on running and an officer Tased him. 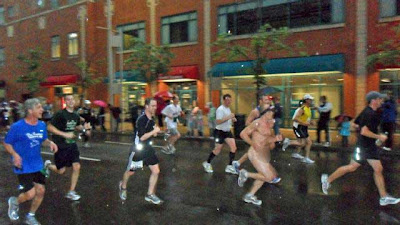 Henderson acknowledged the incident occurred but said he doesn't believe he did anything wrong. "I've run in marathons all over the country, and I think I know the running culture pretty well and I know that anything goes on race day," he said. "This is something that happens and is tolerated in the running culture, along with runners who sometimes (urinate) or defecate during a race. Shouldn't that be considered indecent exposure, too, if what I did was indecent? In fact, running naked was encouraged in a marathon I ran in San Francisco, so I don't know why this was such a big deal."

Henderson said he hadn't planned on running naked. He said he borrowed a pair of running shorts from his father, Stephen, but that after he started the marathon, they started slipping off. "I looked but couldn't find a drawstring ... I kept fighting and pulling on them, and then the elastic gave way so I let them drop," said Brett. "I just went with it because I wanted to finish the marathon." Henderson said he tried to tie his tank top around his waist, but that didn't work out, either. "It was too short to be a belt ... all the other runners were supportive and kept encouraging me to continue, so I was running naked," he said. "It was cold and rainy, so I wasn't exactly proud of what I was showing." 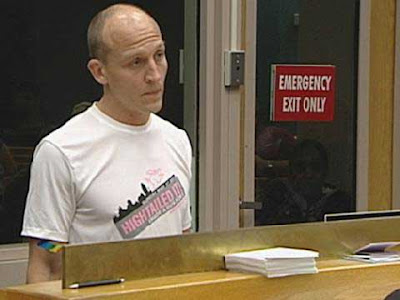 Eventually, he said, a policeman started making a move toward him in the middle of the pack, but Henderson said he accelerated and the other runners helped shield him. "At one point, the policeman charged me and told me to stop running or he was going to Tase me, and I could sense his aggression and rage and I thought the police were going to manhandle me," said Henderson. "The metal arrows of the Taser were shot into me and electrocuted me, and I went into convulsions on the ground. When I finally came to, the policemen were standing around laughing at me. They put me in the squad car and took me to jail, where I spent four hours." Henderson said he suffered burn injuries from the Taser. He will be arraigned in Cincinnati and said he plans to plead not guilty.
Posted by arbroath at 7:05 am
Email ThisBlogThis!Share to TwitterShare to Facebook

If karma existis, that policemen should be shock in the balls the next time he showers.