Kitten with head caught in can rescued from manhole

They say cats have nine lives, so that means one Peoria kitty is down one. The frisky feline was trapped in a storm drain. Some bar employees heard meowing coming from the drain and decided to try and help. The situation became more intense when they noticed the cat had his head caught in a soda can. 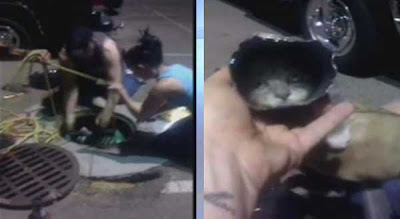 Kelli Baker said, "It definitely made it more urgent because we were afraid it was going to suffocate." Baker, along with some of her employees, rigged together a milk crate with some rope and lowered it down the drain to rescue the kitty.

"It was incredible," Baker said, "we were scooting around for some time and finally it was like we got it." Getting the cat out of the hole was the easy part. Getting the kitty out of the can became harder. Baker said one of her employees pulled out a razor blade, and after a few careful snips, out he came.

Now the cat, who is affectionately called "Pepsi," needs a home. Baker said her living situation simply doesn't allow her to keep him. "Hopefully we can find him a good home," she said.
Posted by arbroath at 6:06 am
Email ThisBlogThis!Share to TwitterShare to Facebook

Yay for this:)!! Kitten musta been hungry/weak enough to not to even attempt to maim rescuers-- that is good! Means he's strong and gonna make it:) GOOD JOB GUYS!!

After 2 weeks(on Sat.) I staked out and freed "net-cat". A kitten who after 2wks had remained stuck in a fishing net... yeah, needless to say my hands and fingers are scratched and bit- to shit:(... Try scruffing a feral cat w/ something already tight around its neck...yeah, not fun, and as well- completely ineffectual:( aarg. A few (or lots) of scrapes/bites are inconsequential when factored into saving a life though- right:)!!!