Aethiest found face of Jesus in mould behind fridge

An atheist was more than a little surprised when he found Jesus behind his fridge.

Father-of-three Kenny Iddenden was shifting the old refrigerator at his Herne Bay home with his uncle Andy when they found a mystical patch of mould, which he claims looks eerily like the saviour. 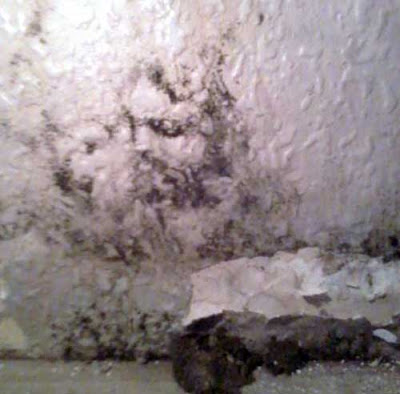 The unemployed 27-year-old said: "As soon as I saw it I thought 'that looks like Jesus'.

"I took a picture on my mobile and then wiped it off - it might look like Jesus but I've got three kids and can't be doing with mould in my house."
Posted by arbroath at 6:01 am
Email ThisBlogThis!Share to TwitterShare to Facebook

You let him down from the cross and he appears everywhere now. Sheesh!

I find pages from the bible are very good for wiping things. And for rolling a smoke if you've run out of papers.