The Half Assini District magistrate’s court in Ghana has referred to the Western Region Supervising High Court Judge in Sekondi for punishment, two women it has convicted, as the gravity of their cases deserve stiffer punishments that are above the court’s authority. Madam Agnes Miezah Bazayi, 48 and her daughter Georgina Morkeh Menlah, 18, from Nglekako near Beyin, pleaded guilty to Abetment of crime and causing harm to Mr Ezah Kojo, a fisherman from the same town.

Prosecuting Police Chief Inspector Franklin Selby told the court Presided over by Mr Kofi Kpogo that Madam Bazayi owned a coconut tree behind Kojo’s kitchen whose branches and copra dropped on the kitchen and damaged its roofing. The Prosecution said on November 2, 2012 , Madam Bazayi told Mr Kojo to prune the coconut tree to prevent his kitchen from further damage. Chief Inspector Selby said the following day Mr Kojo engaged the services of a man whose name was only given as Mr Kelamo to do the pruning. 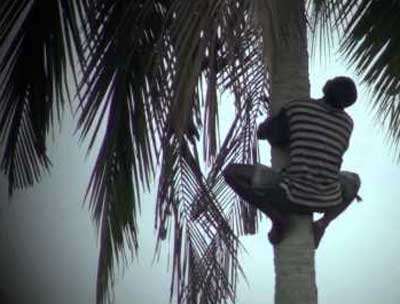 The Prosecution said while Mr Kelamo was pruning the coconut tree, Madam Bazayi and her daughter used a long Raffia stick to pierce his buttocks so he came down from the coconut tree. He said Mr Kojo climbed the coconut tree to do the pruning himself, but the accused picked a quarrel with him and threatened to pierce his buttock if he attempted to cut down the branches of the tree. The prosecution said Mr Kojo ignored their threats and climbed the tree to do the pruning, but while up there, the woman and her daughter pierced his buttock with the stick.

Chief Inspector Selby said in the process the stick penetrated through the anus of Mr Kojo and damaged some vital organs in the intestine, including the rectum and he was rushed to the Eikwe Catholic Hospital. Mr Kojo was referred to the Effia Nkwanta Regional hospital in Sekondi and later to the Korle Bu Teaching Hospital in Accra where he underwent a major colostomy operation to form an artificial anal opening in the body from the colon, adding that the victim cannot go to toilet through the normal anus but through a tube.
Posted by arbroath at 6:01 am
Email ThisBlogThis!Share to TwitterShare to Facebook