It didn't take long for a fire to completely destroy an historic wooden train bridge in Porcupine Plain, Saskatchewan, Canada, last Friday. And now a nearby resident is expressing deep remorse after a grass fire he started grew out of control and ignited the structure. Brian Foster lives 200 metres away from the bridge, which has been a landmark in the town since 1929 when it was first built. But on Good Friday, a controlled grass fire that Foster had started near his property spread quickly, and engulfed the bridge in flames. 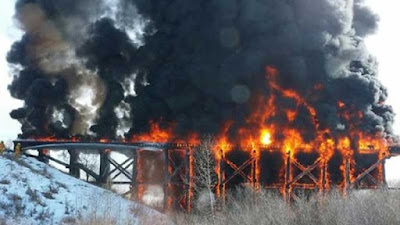 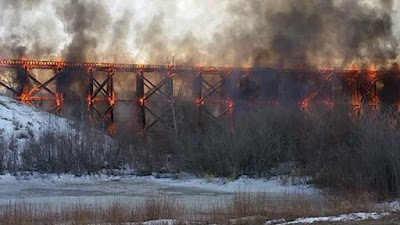 After the accident, Foster can't shake the deep sense of remorse he feels. "It was an accident," Foster says. He said he was burning grass on the walking paths and cross-country ski trails on his property. He said he tries to maintain the trails for the benefit of the community. "I was burning some of the long grass on a steep incline … and as soon as it touched those creosote-covered posts, the flames just shot right up to the top," he recalled. "I tried to put it out with snow but that didn't work," Foster said. He said he was thankful that passers-by noticed the fire and called the local fire department.

Crews were dispatched and also made an attempt at dousing the flames. "They didn't have much more luck," Foster said. Foster said that, just as farmers use burning techniques on stubble in their fields, his goal was to manage vegetation on his property. "It's actually a fairly good time of the year to burn because we have a lot of snow on the ground," Foster said. "It helps to control the fire." Foster said he has been rattled by what happened. "I haven't had much sleep the last couple of days," he said. "The scene has replayed as I'm trying to sleep. It's been a tough ride emotionally. 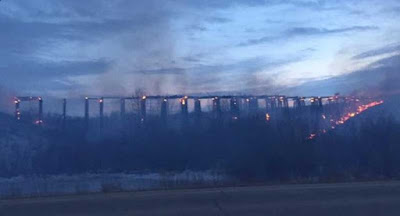 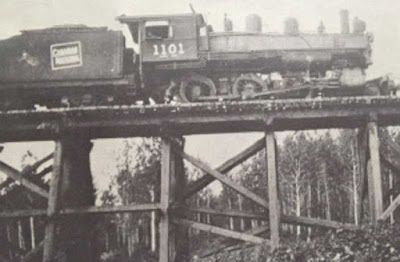 "I assure you that my family and I will be among those who are the most saddened by our loss," Foster added. "I apologise for my carelessness to all who will miss our railway bridge. I also thank the fire department and the RCMP for taking time from their Good Friday holiday to deal with a fire that should never have happened. Again, I offer my most sincere apologies." Foster, who retired five years ago after a career in education, said he has contacted both the RCMP and CN police. He said he has not heard about possible repercussions. "I have no idea what to expect," he said. "But I did it … I've taken responsibility."

There's an audio interview with a very remorseful-sounding Mr Foster here.
Posted by arbroath at 6:02 am
Email ThisBlogThis!Share to TwitterShare to Facebook

He apologises? Well that's OK then... Not.

"a controlled grass fire" - I don't think that means what you think it means.