Mayor and his neighbour in dispute over rock

Rick Brink, the mayor of Harbor View, Ohio, and his neighbour Jon King don’t see eye to eye. What has come between the two residents is a granite rock, about twice as large as a basketball. Except it’s not there anymore. The “decorative landscaping (rock)” was stolen on March 14 from the corner of an East Harbor View Drive property where Mayor Brink lives, according to a theft report he filed two days later with the Lucas County Sheriff’s Office. That corner is on the side of the house where Mr. King, 19, lives, with the property line half a foot from the house. The rock is valued at $40, according to the report. It was bought about eight years ago from Select Stone Co. LLC, in Springfield Township, the mayor said.

Harbor View, Ohio’s smallest village, is located between Oregon and Lake Erie. A total of 123 people lived there in 2010, according to the US Census, which estimated its population in 2014 at 100. “The victim told deputies someone stole his landscaping artifact (rock),” deputies wrote in the report. “... He thinks that his neighbour took it due to an ongoing feud that he is having with him. He says that there has been [a] physical threat in the past made against him.” Mayor Brink, 49, said that he and his girlfriend saw Mr King pick up the stone, carry it across the street, and throw it into an empty lot on three occasions during the past month. Each time, the mayor retrieved the rock and put it back, he said. When the mayor did not see the rock on March 14, he went over to Mr King’s residence and “told him he needs to replace the rock,” at which time Mr King told him to leave. 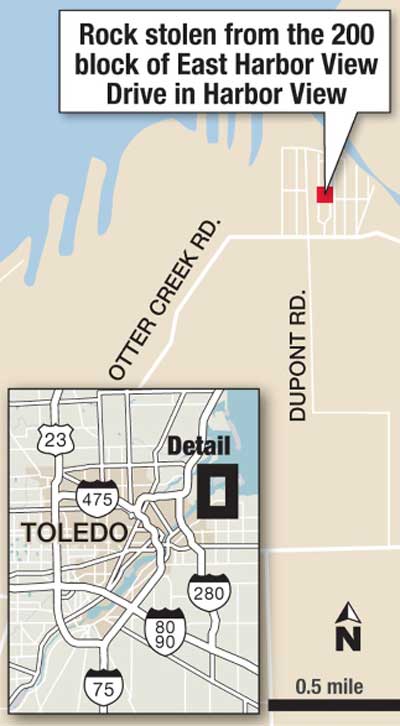 Mr King said he has never touched or moved the stone and denied being involved in a feud with the mayor or having ever threatened him. He said he moved into the house about two months ago and had since had just one run-in with the mayor when the latter showed up on his doorstep March 14. “He came over and started yelling,” Mr King said of the mayor. “[He was] yelling just about everything. I just told him to get off my doorstep.” When asked, Mr King mentioned that the mayor accused him of taking the stone. Mr King also said that he does not have a job and that he is a 2014 high school graduate. A sheriff's deputy who took the incident report wrote in it that he told the mayor “not to go there anymore” and “if there is a problem to call police.” “There is no proof at this time that the neighbour took the rock,” the report said.

Mayor Brink, who was elected mayor earlier this year, agreed but said he had a village marshal talk to Mr King about replacing the rock. Suzanne Barker, a board member of the Ohio Mediation Association and senior case coordinator and volunteer coordinator at Community Mediation Services of Central Ohio, said she never heard about a neighbours’ dispute over a stolen landscaping stone. “People are usually very conflict-averse and [in a potential neighbours dispute case] most people would find an attorney and ask for advice,” Ms Barker said. “My advice is to go and talk to your neighbour first. But do it when you are calm. If someone comes to you yelling and screaming, you don’t even hear what they are saying. You become defensive and get into a fight-or-flight mode.” Neither Mr Brink nor Mr King are listed as the owners of the houses where they live, according to Lucas County records. Mr Brink said the listed owner of the house he lives in is his girlfriend; Mr King said he lives in his parents’ house.
Posted by arbroath at 6:03 am
Email ThisBlogThis!Share to TwitterShare to Facebook

Sorry, but the Mayor sounds like a nightmare. He obviously loves having a bit of power. If the neighbour did throw the rock away, then he shouldn't be surprised at the reaction. The Mayor is rather petty and hopefully he will not have that job for much longer.

There have been a lot of issues with this kid. He just lead Oregon police on a high speed chase a couple of months ago. 90 mph plus. He also has an extensive criminal record. The mayor is not the problem.