A seaside council in Cumbria have installed new benches at a marina facing away from the sea for health and safety reasons. Norman Eastwood, of Ritson Wharf, said he was surprised when he discovered that the benches in Maryport face away from the marina and give people a view only of a grassy hill or a road.

Mr Eastman said he was delighted that the benches had been installed, but the fact that several were facing away from the picturesque harbour scenes was ridiculous. He said: "I honestly think it is some kind of joke. I have been told that it is a health and safety issue but that is ridiculous, too." 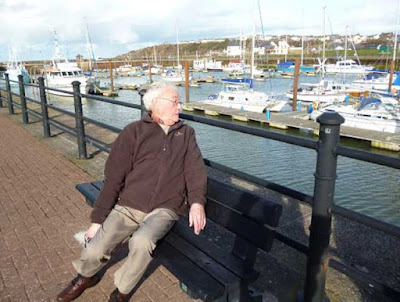 He said if health and safety was a real issue, it might have been better in install backless benches so people could sit facing in either direction. Maryport Town Council used a £10,000 grant from Allerdale council to buy 16 benches for around the town and harbour and plans to buy three more. Paul Bramley, town clerk, said most of the benches on the harbour give people a view of the sea.

He added: "The couple that face the wrong way had to be like that for health and safety. The pavement is particularly narrow there. To allow people enough space to sit on the bench and face the marina would have meant it would have blocked the pavement and almost encroached onto the road." He said he hoped that Maryport residents and visitors would benefit from having good quality benches to sit on around the harbour.
Posted by arbroath at 6:02 am
Email ThisBlogThis!Share to TwitterShare to Facebook