After being a responsible owner and picking up after his dog, a man from Maidstone in Kent did not expect to be on the receiving end of a fine. On Tuesday last week, 53-year-old Andy Evans took his two Jack Russells, Digger and Maisy, for their morning walk before he set off to work, something he has done every day for around the last nine years. After the two pets did their business, Mr Evans, who owns a fountain pen shop in Tonbridge, picked up the mess and bagged it. 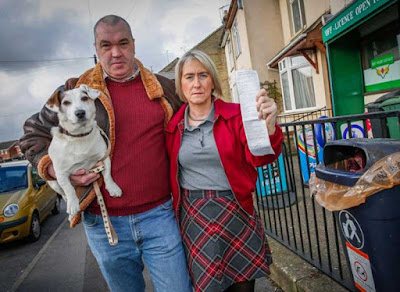 It was after he had disposed of the waste in an ordinary litter bin, outside Manak Supermarket, he was followed to his home, on the same street, by an environmental enforcement officer, who issued a £75 fine. His wife, Amanda, 48, said the pair were shocked. She said: “We’ve lived here for 40 years and have never experienced anything like this. I couldn’t believe what I was witnessing. We always pick up after them and make sure the streets are clean.”

Mrs Evans, a former Special Constable, said despite protesting to the officer at the time, they were incorrectly informed the council had changed its approach and was operating a zero-tolerance policy. The nearest dog waste bin was around a 10-minute walk away, and was not on the route Mr Evans was taking. Mrs Evans said: “It’s quite a walk to the nearest one. There was one nearer but it was removed several years ago." The pair paid the fine, fearing escalating costs or court action, but Maidstone Borough Council has since apologies and refunded them.

Mr Evans said: “I’m glad they came to their senses and that it’s sorted now, but it’s annoying it happened in the first place.” Michael Swoffer, MBC’s environmental enforcement manager, said: “It is not an offence to put dog waste in a litter bin, so this fixed penalty notice was issued incorrectly. We have refunded the money and would like to apologise for the mistake. Some years ago our policy was that dog waste must be deposited in a dog waste bin not a litter bin, however this has changed and it’s actually something we encourage. We have made sure the officer who wrongly issued this notice is aware of this.”
Posted by arbroath at 6:01 am
Email ThisBlogThis!Share to TwitterShare to Facebook

Good grief! They should be congratulated for being good citizens. I'm a dog sitter, and always pick up after my dogs, but I see so much poop just left where it fell it makes me angry.