Couple unhappy that Panasonic won't fix their television because they smoke

A couple are claiming Panasonic won't fix their £800 television because they smoke. Thomas Defty and partner Denise Head were given a five-year guarantee with the set, which was bought with inheritance money she was left by her mother. Problems began when the 42in HD LED television started to show shadows on the screen. And now Thomas, 53, has been left feeling unhappy after Panasonic said it would not fix the screen because damage was caused by smoking. They couple bought the TV from Calverts, in Seaham, County Durham, in 2012 and say both they and the store were told initially the screen would be repaired. But the pair said they were later told by Panasonic that, after investigations, the damage had been caused by nicotine smoke and was not covered under guarantee.

Thomas, of Seaham, said: “Panasonic said they’d sent photos away and we heard nothing for two weeks. Then when they phoned back they said they wouldn’t be fixing the TV because it was because of nicotine smoke, It’s disgraceful, they should be replacing the screen. It’s wrong. That television cost £800 and we’re both on benefits. I can’t see how it’s happened. They said there was external damage, smoke damage and pressure marks. Me and Denise smoke. We have about 20 a day, but we’re not in the same room all day and we have the window open, so it’s not a smoke-filled room. I’m not buying another thing from Panasonic again, and we’ve told our friends and family not to either. We used to get everything from them, but not any more.” 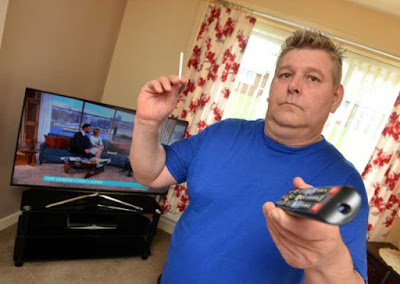 Since the problems, Thomas and Denise, 60, have spent £500 on a new television. Thomas praised Calverts for their good customer care, saying the store took £200 off the cost of a new set. A spokesman for Panasonic said the TV was taken to one its approved service centres and added: “Upon investigation and receipt of photographs the service centre advised that there was evidence of smoke ingress and a smell was also present which seemed to have caused the shadowing in the panel. Unfortunately this meant that the fault was not covered by the extended five-year warranty. The exposure to nicotine is classed as an environmental cause of damage; this unfortunately is not something that is classed as a manufacturing defect and was therefore not covered for repair by Panasonic.

“Our television sets are not sealed units, in that they have vents built in. “In order to cool the panel – the screen – the television injects air from its surrounding environment and this is passed through to the viewing panel. The panel is manufactured with many layers of diffusers; when the set is exposed to air that contains nicotine this is subsequently also passed through the television and to the panel, which can then cause damage to the picture quality. I appreciate that it appears to be a rare occurrence; however, it is not something that is covered by us as the manufacturer, nor under the terms and condition of the warranty. Usually in these cases the customer is either then presented with the option of having this repaired at a charge, where applicable, or purchasing a new television set of their choice at a cost.”
Posted by arbroath at 6:02 am
Email ThisBlogThis!Share to TwitterShare to Facebook

I smoked for 28 years, and never had a problem with any of my TVs due to that. If Panasonic TVs are that cheaply made, then I'll know not to bother buying one.

@shak so you've had flat panel LED TVs for 28 years?

AI have worked with electronics flute over 30 years and I've seen plenty of devices damaged by cigarette smoke. Not only does the horrible, sticky, thick, yellow gloop damage equipment but it's very unpleasant for technicians to have to deal with and probably a health hazard.

It's become less common over the years, not because equipment has changed but because fewer people smoke.

The only thing that surprises me about this is how they can afford 20 cigarettes a day (presumably each). I hope they've fitted air filters to the new one. I don't blame Panasonic for not fixing it, it wasn't a defect.

They could stop smoking and get off their asses to go outside once in a while. Maybe that way they wouldn't miss their television so much...

I find it curious that a certain 'class' of folks have to always find blame in others (in this case Panasonic) when they encounter a problem in life. In this case- 'my television unexpectedly broke- it must be someone else's problem and I will blame them for not fixing or giving me a free tv'. Man up and take some personal responsibility people....it broke, these things happen!

In our case, when something breaks (which frankly is a fact of life- all things eventually break) we look at it as 'license' to go out and buy a new one!

I smoked for 36 years, and destroyed some paintings. You can't clean a watercolor that has been damaged by smoke. And that's only one example of things I damaged by smoking.

I do agree with you on that, Barbwire. Every time we moved, the walls were only white under something that was hanging. Never destroyed anything that was electronic, though, I stopped smoking inside in 1994 when my husband realized how much smoke was coating everything. You can find the same thing or worse with candles, though.

Cigarette smoke can easily damage electronics. I work in IT, and used to be in hardware repair. Computers and other electronics use moving air to cool themselves enough to continue functioning. There is nothing that can fix the thick, brown/yellow tar that smoking causes. It is just thick, nasty, and coats everything inside the device. Pouring molasses in your computer is less messy and easier to fix. I can definitely understand smoke destroying a LED TV.