A 120-pound Great Dane stuck about 20 feet up a tree in rural Louisville, Nebraska, was rescued by firefighters late on Saturday night. Wes McGuirk, the dog’s owner, couldn’t believe his ears and eyes when, after searching his home, yard, barn and garage for his dog, Kora, he heard a soft whining from above. McGuirk said he pointed his flashlight up the tree, “and there she was, like a little owl perched in a tree, with her eyes looking at me.” “Yep, my Great Dane is in a tree,” he thought. 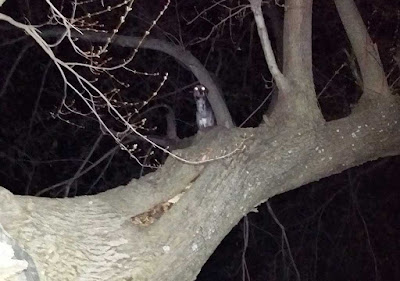 “We just couldn’t believe it,” McGuirk said. “It just doesn’t make physical sense that she could be that high in a tree.” The unusual rescue ended well for Kora, who was caught in a canvas tarp after being partially lowered with a harness and long leash. While McGuirk was in Omaha on Saturday, the 16-month-old bluish-grey Great Dane/mastiff mix apparently leapt a 5-foot fence and scrambled up the tree - probably while chasing a raccoon or squirrel. 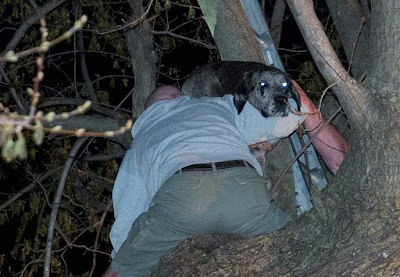 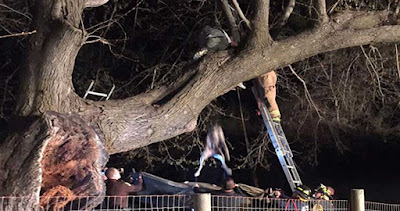 When McGuirk returned home and found Kora, he climbed a ladder into the tree and tried to coax her toward him. When that didn’t work, he called the Cass County Sheriff’s Office. That night, the firefighters from Plattsmouth and paramedics from Elmwood were covering for the Louisville Volunteer Fire Department, which had been holding a recognition dinner for its crew. Kora was scared, said Jacob Blunt, an Elmwood firefighter and paramedic.


YouTube link. Raw video of Kora making her secent from the tree. 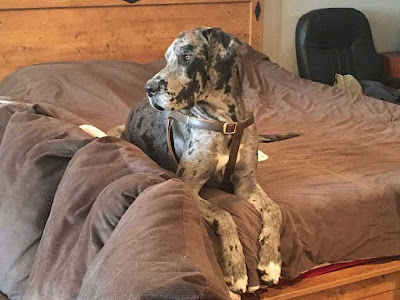 “We could see her shaking from the ground,” he said. “She didn’t want to come down.” Fortunately, a K-9 officer with the Cass County Sheriff’s Office, Deputy Rob Rice, had a harness to use. A firefighter slipped on the harness, attached to a 16- to 20-foot leash, and nudged Kora off the branch. The stitching on the harness gave way about 4 or 5 feet into the descent, said Lt. Jon Hardy of the Plattsmouth Fire Department. The dog fell into the tarp, not touching the ground except for one paw that tore through the tarp, he said. Kora scampered away and resumed “just being a dog,” McGuirk said.
Posted by arbroath at 6:06 am
Email ThisBlogThis!Share to TwitterShare to Facebook