An altercation between a man and a Ford Taurus on the Winona State University campus in Minnesota has resulted in felony charges filed against the man. 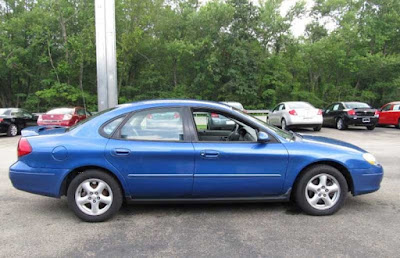 Asked to explain his bellicosity toward the inanimate object, Belenky told officers that it was his car and it had been giving him trouble, court documents state. Officers observed that Belenky appeared intoxicated, an observation confirmed by a breath test that indicated a .197 blood alcohol content. Belenky was then cited for underage drinking.

Unfortunately for Belenky, the Taurus he had assaulted wasn't a Taurus he owned, a fact that he realised by the time officers spoke with him. According to the complaint filed against him, Belenky did $1,886.35 worth of damage to the defenceless Ford, resulting in a felony charge of first-degree criminal damage to property. No court date has been set.
Posted by arbroath at 6:05 am
Email ThisBlogThis!Share to TwitterShare to Facebook