A man using a blowtorch to weed a flowerbed on Sunday morning accidentally set fire to the century-old home where he was living. Crews responded to the blaze in Everson, Washington at about 11am, said Randy VanderHeiden, assistant chief for Whatcom County Fire District 1. They later learned the fire started shortly after the occupant, Randy Velthuizen, had used a propane torch to burn away weeds near the two-story house.

Velthuizen, 53, said it was wet outside when he started burning weeds at about 10am. He’s lived at the house for about 20 years, and the home is about 120 years old, he said. He’s burned weeds the same way before. “It kills it better,” Velthuizen said of using a blowtorch to get rid of the weeds. “They don’t come back for a long time.” Velthuizen said he was working on the back patio when he smelled smoke about 30 to 45 minutes after finishing killing weeds in the flowerbed. He called 911. 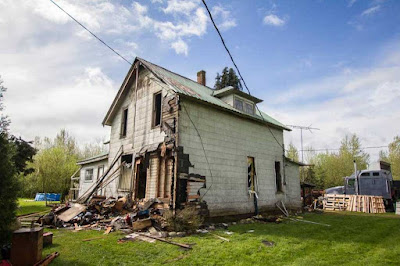 Because of the old-fashioned construction methods used to build the house, the fire spread quickly, making it harder for crews to put out, said Whatcom County Fire Marshal Mitch Nolze. Half of the home, Velthuizen said, is “totally totalled,” with the other half is damaged from smoke. He salvaged a few items from the house, he said, before officials told him to leave the rest while they investigate the scene. Velthuizen did not have renter’s insurance.

“It’s just stuff from the house, it can be replaced, most of it,” Velthuizen said. “Some of it was sentimental, but whatever. It just made downsizing a hell of a lot easier.” Velthuizen said he was now temporarily living in a mobile home parked on driveway of the house until he found a new home Though common, using a blowtorch to get rid of weeds can be considered a crime if doing so puts property at risk of burning, Nolze said. First-degree reckless burning, under state law, is a felony. Nolze said he would not refer this case for charges, however, because it was an accident.
Posted by arbroath at 6:05 am
Email ThisBlogThis!Share to TwitterShare to Facebook

My neighbour burned down her garage this same way using a blowtorch to kill backyard weeds. Afterwards she didn't seem to realize how stupid she'd been. The landlord wasn't pleased that the garage she owned had burned down, of course!