A man who decided to take an early-morning spin on his grandad’s lawnmower was stopped by police and ended up with a 12-month driving ban. Police found James Swinburne chugging down the pavement of Tag Lane, Ingol, Preston, Lancashire, after he had become stuck in mud in nearby fields. “I just thought I would take it out for a drive, I thought it would be fun,” said the 27-year-old. James was caught on the petrol-driven lawn mower at 4am on February 1, by two police officers on mobile patrol. 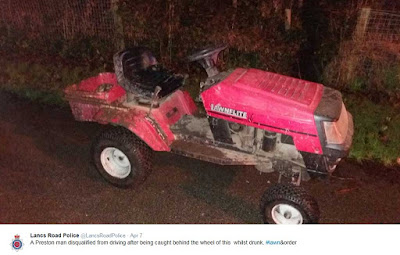 When they spoke to him, they found he was under the influence of alcohol and arrested him, and James spent a night in a cell. James, who lives with his grandparents in Fulwood, took the mower from their home. He said: “It was just a bit of fun. I was probably about 600 yards away from my grandparents’ house, and the cops pulled up next to me and said, ‘What are you doing?’ I had gone down all the paths from my grandad’s house through the woods. Then I thought the quickest way home was on Tag Lane, I hadn’t seen anyone, not even another car, and suddenly, out of nowhere, police.

“It’s a ride-on lawn mower like a tiny little tractor, it goes four miles an hour flat out.” James said he had had a “few vodkas”, and in court admitted to driving a mechanically propelled vehicle, the Lawnflite lawn mower, on Tag Lane while unfit to drive through drink. He said a breath test showed he was three times the legal drink-drive limit. “I said ‘Can’t you just let me go on my way?’ I was a bit embarrassed. My grandad was angry, they impounded the lawn mower and he had to pay to get it back. I won’t be doing it again, I’ve learnt my lesson.” James described the incident as a “lesson to other people - just don’t do it”. 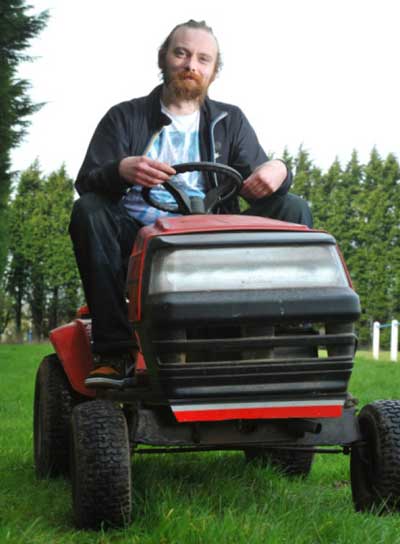 He said: “It was just a joy ride. I just went in the fields near the Guild Wheel, I got stuck a couple of times in the mud and I thought ‘I’m not riding back through those fields’, I thought I’d go down the footpath.” James was disqualified from driving for 12 months, even though he doesn’t drive a car. He was also fined £88 and ordered to pay a £20 victim surcharge and £40 in costs, after he appeared at Preston Magistrates’ Court this week. He said: “It’s a bit embarrassing and it was obviously a stupid thing to do. I’m grateful they only did that, because they could have done a lot worse. If it happened to someone who had a car it would be career ending.”
Posted by arbroath at 6:03 am
Email ThisBlogThis!Share to TwitterShare to Facebook