A man from Macclenny, Florida, left the scene of an argument in Baker County on Saturday night and led police on a high-speed chase through a few streets before fighting a deputy's K9 and deputies themselves before a handcuff key was discovered in his rectum, authorities say. Nicholas Dwight Byram, 32, was arrested and charged with a litany of offences, from resisting arrest with violence, aggravated assault, drug possession and obstructing police, according to the Baker County Sheriff's Office. Deputies received a call reporting a disturbance in rural Baker County, but then heard that "one half" of the disturbance had fled in a Jeep Grand Cherokee.

Byram, the driver of the Jeep, forced a deputy to drive into a ditch to avoid a wreck, deputies say. Byram continued south. Two deputies were in pursuit of Byram by now. He'd been driving the Jeep at up to 80 miles per hour, deputies say. "Stop sticks," akin to spike strips, were used at an intersection. The front-left tyre was struck, but Byram allegedly continued, reaching speeds of 110 mph. He drove through intersections at speeds nearing 70 mph before another tyre popped on Byram's Jeep and he lost control, smashing into a tree. 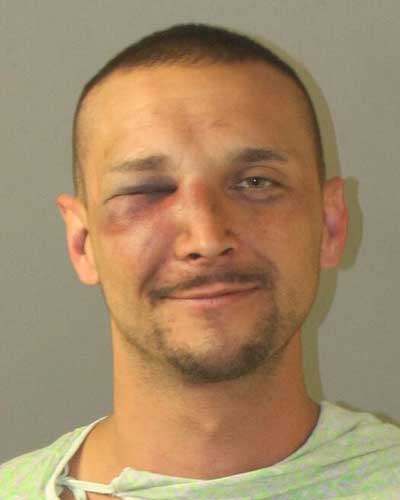 Multiple deputies descended on Byram's wreckage, but the suspect reportedly wouldn't leave the SUV. A K9 deputy approached the vehicle. One deputy tried punching out Byram's back window with a device, but ended up cutting his hand. The K9 deputy was able to open the passenger read door and let K9 deputy Monsoor into the car. Byram fought with Monsoor, punching and kicking the dog while trying to wrap his hands around the dog's muzzle. Byram eventually left the Jeep and then started wrestling with deputies, who eventually tasered the suspect after being punched and kicked themselves. After all that, deputies found a handcuff key in Byram's rectum. He also had to be patched up after he was injured by the dog and wreck.

Deputies involved in apprehending Byram report no major injuries, but one was almost struck in his cruiser by Byram's Jeep and another hurt himself trying to punch out the glass. Monsoor was struck multiple times trying to subdue Byram. Byram's was charged with: Reckless driving with damage to a person or property; Fleeing to elude police at high speeds; Driving while licence suspended; Aggravated assault with a deadly weapon without intent to kill; Battery on an officer; Assault on an officer, 2 counts; Resisting an officer with violence; Resisting an officer without violence; Possession of a concealed handcuff key while in custody; Touch, strike or cause harm to police animal; Possession of not more than 20 grams marijuana and possession of drug equipment.
Posted by arbroath at 6:06 am
Email ThisBlogThis!Share to TwitterShare to Facebook