A police force could become the first in the country to introduce cats in the fight against crime, after a five-year-old girl wrote to the chief constable. Eliza Adamson-Hopper contacted Durham Police chief Mike Barton suggesting cats would be good at listening out for danger and rescuing people from trees. She received a reply saying he would pass the idea on to an inspector. 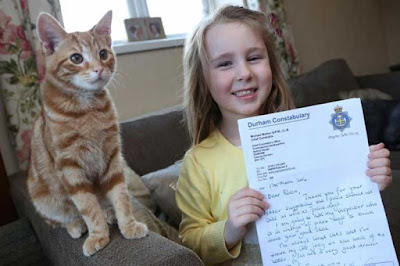 The force has now confirmed it will consider using felines in an as-yet unspecified role. Insp Richie Allen, of the dog support unit, said: "I can confirm the force is looking into recruiting what we believe to be the first UK police cat. Their duties and responsibilities have not yet been agreed but if nothing else they will become the force mascot. Of course, if it smells a rat we'll expect it to catch it." 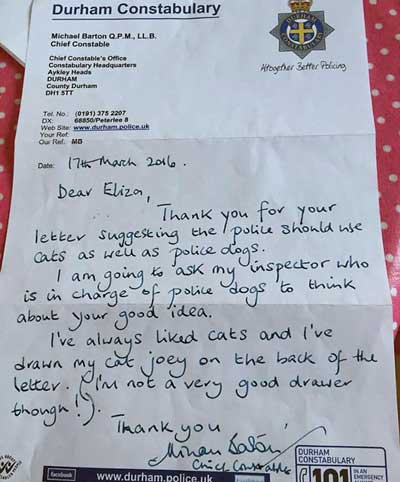 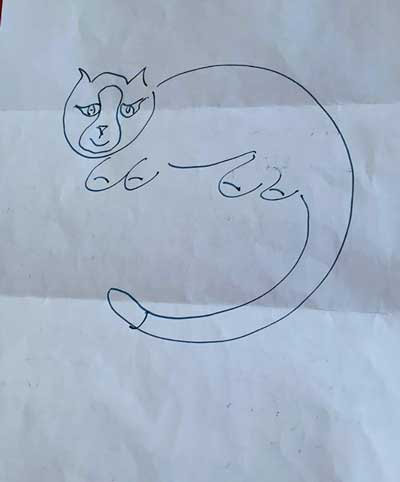 Eliza, who has a cat called Mittens and a dog called Susie, wanted to know why the police use dogs but not cats. Her mother Cheryl Adamson, from Burnopfield in County Durham, said: "Eliza has loads of questions for everyone and I don't always know the answers. We typed out a letter to the chief constable, she told us what to write, and we said she might not get a response because he is a busy man."

Eliza's letter read: "A police cat would be good as they have good ears and can listen out for danger. Cats are good at finding their way home and could show policemen the way. Cats are good at climbing trees and hunting and could rescue people that are stuck." Mr Barton's reply, which included a drawing of his cat, thanked her for the suggestion. Ms Adamson said: "Eliza was delighted with the response, but we thought that would be the end of it. Then the inspector from the dogs unit sent her a calendar and invited her to an open day."
Posted by arbroath at 6:01 am
Email ThisBlogThis!Share to TwitterShare to Facebook