A couple flying home from a holiday abroad were fined $NZ400 (£200) for having a carrot in their bag. Hannah James and Ben Geeson-Brown, both 23, were on their way back to the UK after spending the last nine months travelling around Australia.

But when the pair flew back from Adelaide to Auckland for their flight home last Monday, they were stopped by staff and told they had fallen foul of New Zealand's strict bio security laws. Mr Geeson-Brown, from Charlbury near Witney, Oxfordshire, said: "We were going through the airport and we had one carrot in the bag. We usually put lunch in, but I completely forgot about it. We saw there were lots of signs about the rules but I didn't think anything of it. 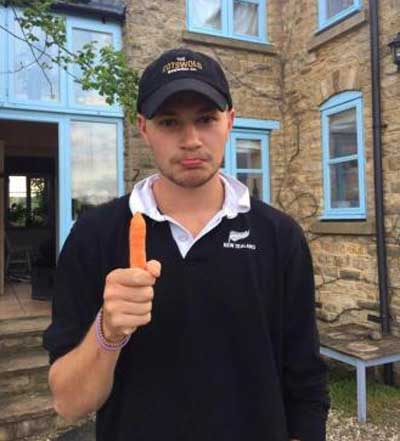 "A sniffer dog came up and was quite close to the bag. The lady holding it was very friendly, so we didn't think anything was wrong." The security officer found the carrot and told the couple they would face a £200 fine for breaking the law. Mr Geeson-Brown said: "We realised it was quite serious. It was the end of the holiday and we were hoping to keep the money we had left. I understand why they have the law, but it seemed very extreme for a little carrot.

"Hannah was the same. We went into the office and they told us we could either pay the fine or contest it. They explained it all and said it was like a speeding ticket, that there isn't really any defence if you get caught." Under New Zealand law, people must declare any fruit or vegetables in their possession when they enter the country. Ben and Hannah, from Leeds, were eventually released after paying the fine and caught their flight back home the next day.
Posted by arbroath at 6:02 am
Email ThisBlogThis!Share to TwitterShare to Facebook

Learn to read, Dumb Arse, we don't want your killer pests here.
Don't like it ? Don't come back.

Silly tit. It's expensive, but what do you expect? It happened to a colleague of mine, he described it as the most expensive apple he never got to eat.

Ooh those governments are sneaky, for instance;During flight to USA you are required to declare if you were involved with the exterminations during WW2 without a single warning before you board.
Seriously though, is this common sense?

So they knew the carrot was there. They read the signs that said you must declare any fruit or veg. They ignored the signs.