The life of a blind woman from Cheltenham, Gloucestershire, has been made a misery thanks to seagulls attacking her on the morning commute. Megan Paul, 24, walks from St Paul's to the town centre to catch a bus to Gloucester - a journey she says is becoming increasingly perilous due to the aggressive pests. 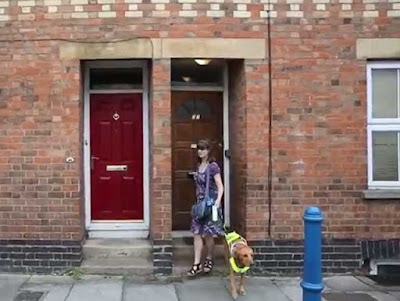 Megan is registered blind and her guide dog, Tate, often bears the brunt of the attacks. Megan has now issued a plea for help to prevent the birds from attacking her and scaring Tate. She said: "I would be at the bus stop near the Brewery Quarter and the seagulls would follow us and then swoop down on us. Now I have been avoiding the area.

"I've had to learn new routes to walk through and they are getting worse both here and in Gloucester where I work on Westgate Street." She added: "Often they go for the eyes and if he loses those I'll be forced to stay at home. People need to be made aware of this issue because it is becoming more of a problem.

"I have been advised to use an umbrella to deter them but that hasn't worked. I end up swinging the umbrella around and I'm worried I could hurt my dog. It's really quite scary and so I have been forced to walk with other people so that nothing happens." She said there needs to be a new form of management when it comes to minimising the number of gulls in the area or at least controlling the levels.
Posted by arbroath at 6:02 am
Email ThisBlogThis!Share to TwitterShare to Facebook