Almost 3000 traffic offenders have been ordered to plant a tree, as part of a new community service initiative by the Indian state of Telangana.

The Telangana Ku Haritha Haaram initiative, was launched on July 7 last year and has since enlisted at least 2765 motorists to plant saplings across the district. 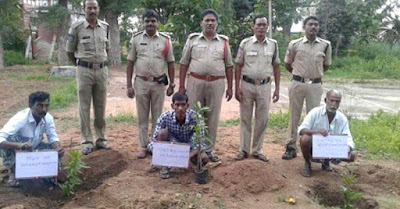 Police said their goal was to plant a total of one million saplings, thereby increasing the state’s current 24 percent of tree cover to 33 percent. Telangana’s Superintendent of Police Rema Rajeshwari said the community service was “in addition to fines and punishment”. She said criminals and ex-convicts had also contributed to the scheme, as part of “reformative policing efforts”.

“We hope that such positive reintegration programmes will help criminals to join the mainstream, when predisposing factors drive a person to criminal behaviour are addressed in a holistic fashion,” she said. “Our efforts have already started giving results, as many violators are returning to water the saplings.”
Posted by arbroath at 6:02 am
Email ThisBlogThis!Share to TwitterShare to Facebook

They should have to ensure the tree survives at least a year too.