A man from Kelowna, British Columbia, Canada, had an unexpected encounter with a snarling badger while fishing in the middle of a lake. Ron Lancour was alone in his boat on Sheridan Lake, enjoying a peaceful day fishing, when a fully-grown badger suddenly jumped on board.

"He was telling me to get out of that boat, because he was coming in there. I guess he was tired of swimming," Lancour said. "I grabbed my net. With the handle I tried to poke him back into the water, but he was gaining ground on me." Lancour said he then fought off the badger three more times with a wooden oar before he was able to push it back into the lake. 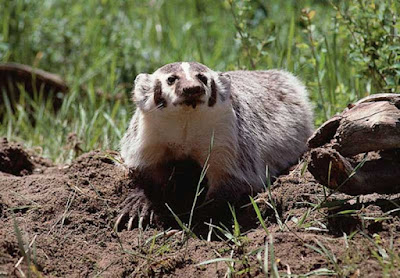 But the persistent badger then jumped back into the boat from a different side, and Lancour had to fight it off again. "I knew that I had to stun him somehow. I certainly didn't want to hit him across the head and kill him, they are a protected species in British Columbia," he said. Lancour says he finally managed to escape by speeding away from the animal.

Badgers are extremely rare in British Columbia. According to Parks Canada, there are only about 200 of them left in the province. A Badgers in British Columbia spokesperson said badgers are proficient swimmers, often crossing bodies of water to seek prey and explore new territory. According to the group, badgers are not particularly aggressive, unless they're out in the open.
Posted by arbroath at 6:04 am
Email ThisBlogThis!Share to TwitterShare to Facebook

Kudos for the fisherman who kept his cool and didn't resort to the first inclination of idiots: kill it!