Heroic action by a resident of the Four Mile area outside Glenwood Springs, Colorado, probably saved a black bear from a death sentence. A two-year-old black bear was spotted for at least the last week in Four Mile with a clear plastic Cheese Balls container stuck over its entire head. “Man, we’ve been getting reports of that bear forever,” said Area Wildlife Manager Perry Will. Concerned residents would call in with pleas to help the jugheaded bear but by the time a wildlife officer could get to the area the bear would be gone, Will said. Jim Hawkins, owner of Four Mile Creek Bed and Breakfast, said on Wednesday his wife spotted the troubled bruin five days prior out by a pond on their property. It didn’t appear the bear could drink and he definitely couldn’t eat, Hawkins said. 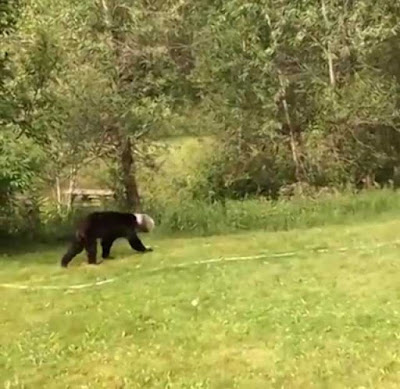 “He was just a little bear with a big problem,” Hawkins said. “He was a 2-year-old with a space helmet on.” Hawkins spotted the bear again three days ago. Again it ran off before a wildlife officer could arrive. Hawkins decided he needed to act if he got another chance. He figured he might be able to lasso the bear, but only because it was in a weakened state. “I’m not completely crazy,” he said. He put rope and gloves in a convenient place and kept his eyes peeled. A passer-by on the road stopped at about 9:30am on Wednesday and reported seeing the bear with a jug on his head. Hawkins grabbed his gear and was prepared when the bear came across his backyard. He downplayed his cowboy skills but acknowledged, “I know how to throw a rope.” 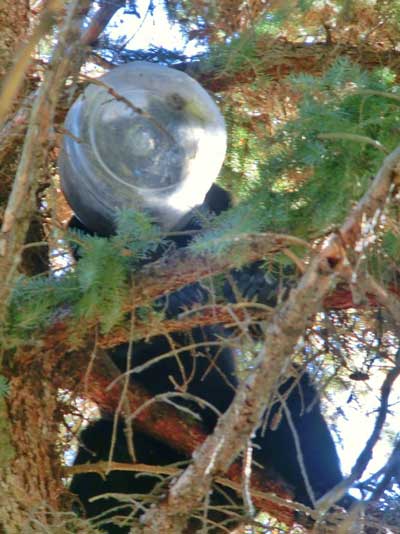 He threw a loop around the bear but it slipped down to the bruin’s midsection. After that, Hawkins said, “it was like a rodeo.” Both Hawkins and bear were pulling. Eventually “the bear figured out his problem was at the end of that rope,” Hawkins said. The bear came after him and they had “a couple of good rolls in the grass.” Although the bear couldn’t use its mouth, it had sharp claws. The bear gave up the fight with the larger man and scooted up a tree. Hawkins tied him off so that even if he came down, he couldn’t get away. Carbondale District Wildlife Officer John Groves rushed to the bed and breakfast after getting the call and tranquilised the bear. They used a tin shears to cut the heavy plastic off the animal’s head. Groves applied a reversal drug and the bear snapped out of its slumber in a few minutes. 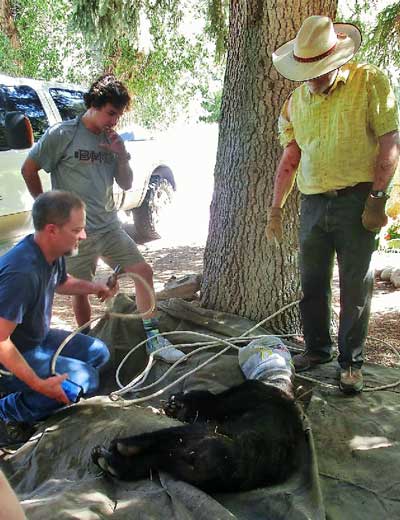 He took a drink then ambled off, Groves said. He estimated its chances for survival were high. Hawkins estimated the bear’s weight at 100 pounds, but the bear will likely get bigger and its demeanor nastier as he recounts the story in the future, he said with a laugh. Hawkins’ arms got cut up and one gash required stitches. Nevertheless, he downplayed his actions and said his friends will be ribbing him over it. Groves said Colorado Parks and Wildlife “highly recommends” people not to interact with wildlife themselves and to call wildlife officers instead. “His heart was in the right place,” Groves added. Hawkins said the lesson to be learned is not to leave food containers in a place where bears can access them. It can mean a death sentence for wildlife. “None of us wanted to see him die the bushes someplace,” Hawkins said.
Posted by arbroath at 6:04 am
Email ThisBlogThis!Share to TwitterShare to Facebook