A Pennsylvania woman put her two young children in the trunk of a red Corvette and then went for a drive with a friend, according to police who pulled over the vehicle after being contacted by a concerned witness. Jessica Marie Reger, 29, was arrested last week and charged with endangering the welfare of her children, aged three and five. 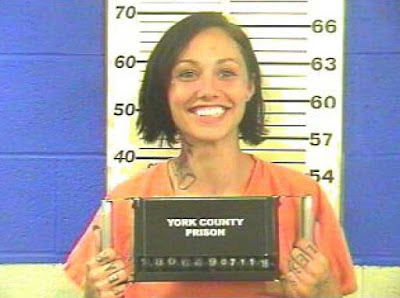 Driver Ilena Blackburn, 28, was charged with reckless endangerment and improper child-restraint system counts. According to a criminal complaint, Reger was spotted last Sunday night putting her children in the Corvette’s trunk near her home in Hanover, a York County borough. Blackburn and Reger then drove away, but were subsequently pulled over by police responding to a 911 call. 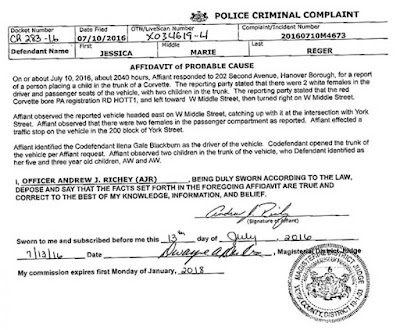 After an officer directed Blackburn to open the car’s trunk, Reger’s children were discovered inside. Officer Andrew Richey noted that the vehicle’s license plate was “RD HOTT1.” While the criminal complaint does not indicate why Reger, who has the words “LESS” and “FEAR” tattooed on her knuckles, put her offspring in the Corvette’s trunk, the sports car has only two seats. 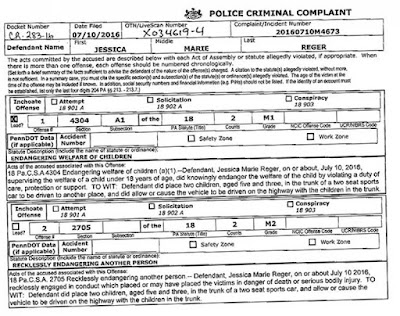 Reger remains locked up in the county jail on $2,500 bail on the misdemeanor counts. According to court records, Reger has previously been arrested for fleeing police; possession of drug paraphernalia; harassment; retail theft; disorderly conduct; criminal mischief; receiving stolen property; and narcotics distribution.
Posted by arbroath at 6:05 am
Email ThisBlogThis!Share to TwitterShare to Facebook

she is proud of this

The poor kids. Someday people will wonder why they do crazy things as adults.

I hope the poor kids will finally be taken away from her before she does something even worse.