A man from Thurston County, Washington, led multiple police agencies in a sometimes dangerous pursuit that spanned two counties and 49 miles on Saturday evening because he was bored, the county sheriff’s office said. Sgt. Dave Odegaard with the Thurston County Sheriff’s Office said David B. McNalley, 30, had no warrants, no prior convictions, and a valid driver’s licence when he tore off through an intersection in Tumwater at 4:38pm.

Burning rubber, he attracted the attention of a sheriff’s deputy, who tried to pull him over. “He took off,” Odegaard said of McNalley, who was driving a 1994 Mercury Sable. “The deputy felt like he basically instigated this pursuit. It went from the Tumwater area into the Olympia city limits and then went onto I-5.” The pursuit went on for more than an hour, crossing into Pierce County and circling back around into Olympia. A handful of patrol agencies were involved. McNalley “was passing cars on the shoulder of the road down near Nisqually,” Odegaard said. 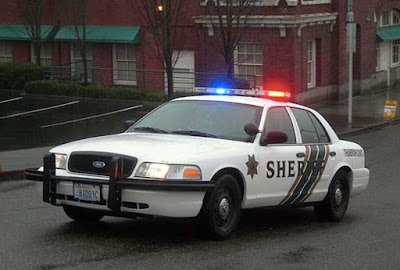 Sometimes reaching 85 miles per hour, the pursuit was “was discontinued three times due to speed and public safety.” McNalley circled back into Olympia. The Thurston County Sheriff’s Department set up spike strips. In trying to avoid them, McNalley lost control and drove onto a farm, hitting a fence at about 5:45pm. There was minor damage to the fence, Odegaard said, but no one was hurt. McNalley didn’t appear to be impaired by drugs or alcohol, Odegaard said. “He said he was just bored,” Odegaard said. “It looks like to us right now ... he instigated this pursuit because he was bored and just wanted to do it.”

McNalley has been charged with three counts of attempting to elude a police vehicle, but other charges could be pending, Odegaard said. He is being held without bail in the Thurston County jail until his arraignment on Monday. Odegaard said it was an unusual chase. Usually, people being pursued don’t come back to the same jurisdiction where the chase started. “It’s frustrating, because in my mind he endangered not only his life but a number of officers that were involved,” he said. “We had jurisdiction from state patrol, Lacey, Thurston County Sheriff’s, Nisqually Tribal as well as all the citizens ... he could have very easily injured or killed some innocent people just for the joy of, ‘I was bored.’”
Posted by arbroath at 6:04 am
Email ThisBlogThis!Share to TwitterShare to Facebook

This guy was _bored_? Geez, what does it take to get him excited? Giving him some military training and parachute him into Taliban country to retrieve a mullah or two. Maybe that'll get his pulse rate up.

You simply cannot make this stuff up.