Police in Belleville, Ontario, Canada, are asking the public to help solve a spate of thefts of female mannequins from downtown store fronts, including one case in which a $160 prom dress was torn off the mannequin and left behind. Police say 11 mannequins, all female, have been stolen since May, during five break and enters and one attempted break and enter at three different locations. In each of the five break-ins, police said only female mannequins have been taken. 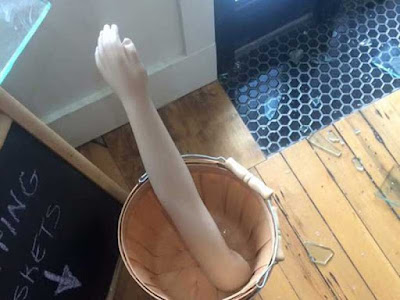 It began on Mother's Day weekend with a failed attempt to get into Simple Elegance, boutique owner Dawn ODell said. "The glass on the front door was broke. Not broke quite all the way through but it was shattered but still intact," she said. Police came to investigate but the window was not repaired right away, and when ODell got to work on Monday morning she found the break-in job had been finished and two female mannequins missing from the display window. "One mannequin had a $160 prom dress on. They ripped it off and threw it on the floor and just took the mannequin," she said.

"The second mannequin had a dress on it, a $60 dress, and they left the dress on that one and took the mannequin. And that's it. There was no attempt made to get to the cash register, to the merchandise in the store, or anything." Her store on Front Street was hit again on June 23, with the theft of two more mannequins, one in a bikini, the other in a dress. ODell said the thefts of mannequins and their clothes have set her back approximately $600. She said police told her: "It looks to be somebody has a fetish for mannequins." Mannequins have been stolen from two other stores, according to police. 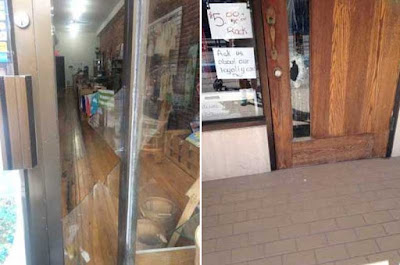 Another store on Front Street was broken into overnight on May 13 and one mannequin was stolen. ​The latest two break-ins occurred at a business on North Front Street. On July 14 at 2:30am the store's front door window was smashed and two display mannequins were stolen, police said. On Sunday, July 24 the front door window of the same business was again smashed and four female torso mannequins were stolen. ​Police could not be reached for comment on the motivation or possible suspects in the crime, but have asked for the public's help in the case. Anyone with information is asked to contact Belleville Police.
Posted by arbroath at 6:03 am
Email ThisBlogThis!Share to TwitterShare to Facebook

Agalmatophilia - there's your $20 word for the day.

Heh heh, you learn something new every day.

Thank you for that, Shak!