Police in Laurel County, Kentucky, say a car crash led to two people inside the vehicle being attacked by a swarm of bees from a disturbed hive. "I just had got done feeding my chickens, watering them and stuff, and I walked back to my house there to get my phone so I could play a video game on it," said Gary Lee Anderson, who lives on Patton Spur Road where the incident happened. 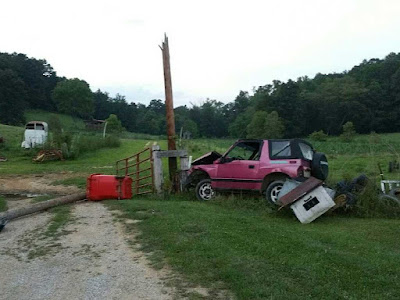 "And all of a sudden I heard a big 'boom,' and I looked back out my door and the electric pole fell and the lines were falling. And the GeoTracker was sideways into the fence." Then the people inside the car, who investigators identified as Noah Elkins, 36, of East Bernstadt, and Priscilla Simpson, 35, of Dry Ridge, got a big surprise. "He didn't know it, but he found out, that there was a hive of bees there," said Deputy Gilbert Acciardo with the Laurel County Sheriff's Office, "and he had disturbed them."

"And the guy came out, screaming and squalling, and running around about like a chicken with its head cut off," Anderson said. Then Anderson says they ran up the road, grabbed a hose outside his home and started trying to spray off the bees. "I told him, 'You need to get out of that water,'" Anderson said, "but I didn't know he was getting eat up by bees, I thought he was just high." Deputies say Elkins and Simpson were under the influence. Simpson told them that she and Elkins had taken several drugs, including Suboxone, neurotin and Klonopin.

Investigators said they had driven down the road looking for a place to swim. "That girl in that little bikini, she had little red dots all over her," Anderson said. Even Anderson was stung while he was out there. Elkins and Simpson were taken to the hospital for treatment for injuries from the crash and for "numerous" bee stings, deputies said. Elkins was cited for driving under the influence, as well as other traffic violations. Simpson was charged with public intoxication. Investigators have called it an unusual case.
Posted by arbroath at 6:04 am
Email ThisBlogThis!Share to TwitterShare to Facebook

Bizarre. Neurontin is an anti-seizure drug, possibly also used for chronic pain. I would not know why it would be a street drug.

I tried not to laugh while reading this story, but talk about sweet justice served. The fact that the driver didn't kill anyone and was only stung by bees should serve as a lesson learned for years to come. Maybe after the next time they are drinking they will have second thoughts about getting anywhere near a car after this bee attack.

Well, this situation just took a turn for the worse for the people involved here. Imagine if every DUI arrest resulted in the guilty party getting attacked by bees. Now that's a thought. Hopefully irresponsible driver learned his lesson from something very odd like this.


Thank you so much for sharing this great blog.Very inspiring and
helpful too.Hope you continue to share more of your ideas.
I will definitely love to read.