Firefighters from Merced, Caliofornia, saved a little girl’s puppy that had taken a two-storey tumble down an air conditioning duct on Wednesday. Firefighters received a call at about 6:15pm for an animal rescue. When they arrived, 6-year-old Aubree Faust told them her new puppy, Lily, a 7-week-old Chihuahua, had fallen into an air conditioning vent on the second floor and slid down the ducting to the basement, said fire Capt. Dewayne Young. 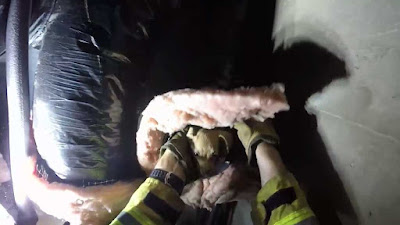 Sue Doane and her family had planned a day trip to Sacramento on Wednesday and were worried about leaving Lily alone. They put her in an upstairs bedroom with food, water and plenty of toys and created barriers out of large cardboard boxes. “When we came home, we couldn’t find her,” Doane said. “All the doors were locked, so we thought, ‘Who could’ve stolen our puppy?’ ” Aubree, Doane’s granddaughter, heard a faint cry coming from the vent.

They worked for hours trying to get to Lily, but she’d fallen too far into the ducting. Lily could’ve been in the ducting for up to five hours, and the family worried about her having broken bones and suffering from heat exhaustion. “We were heartbroken,” Doane said. “We thought something terrible had happened.” The firefighters tracked the ducting from the second floor to the basement and followed Lily’s cries. 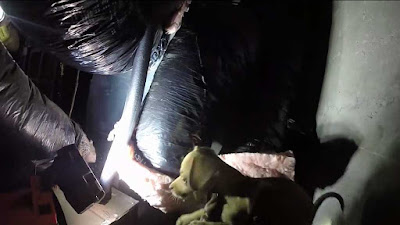 “The little guy was stuck in there and ready to come out,” Young said. “That’s the fun part of our job - you never know what you’ll encounter.” Firefighters crawled into the space and fished the puppy from the ducting. “They were absolutely amazing,” Doane said. “I think the young lady was very happy to have her dog back,” Young said about Aubree. And Lily was glad to be reunited with her family. Doane added: “She was so happy. She didn’t want to be left behind.”

You can watch the video of the rescue here.
Posted by arbroath at 6:05 am
Email ThisBlogThis!Share to TwitterShare to Facebook