Two professional tennis players were ordered off a practice court by a police officer in a bizarre incident at the Washington Open last week. 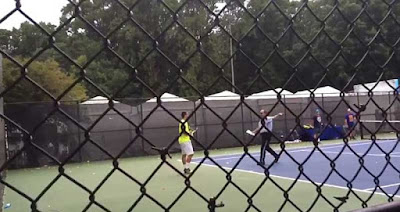 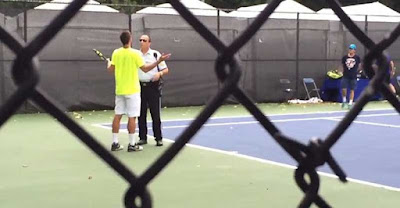 Footage has emerged of a police officer approaching Australia's Bernard Tomic and his hitting partner, Serbian Viktor Troicki, who told the players to vacate the court due to severe weather in the area. The policeman walked into the middle of the playing area and told the players to "get off the court". 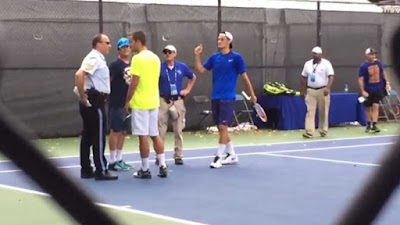 Troicki waved his arms towards the sky complaining about the apparent lack of rain, before the policeman responded "Do you want to knock it off now? Knock it off. Leave, come on. Let's go. I didn't ask for your permission [to get off the court], I'm telling you." At this point, Tomic approached from the opposite side of the court with a cutting observation. 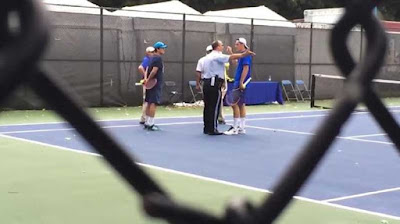 "Excuse me, sir, but it's not raining." The argument continued for about a minute, with an irritated Tomic told that it did not matter if it was not raining at the time. Tomic asked the policeman "Why are you getting so close to me?" as Troicki headed off to get his equipment. The players eventually cleared the court, shuffling off in bemused fashion.
Posted by arbroath at 6:04 am
Email ThisBlogThis!Share to TwitterShare to Facebook

The officer was then seen proceeding to the swimming pool, removing all swimmers he suspected of not having waited a half-hour since eating.

In the officer's defense, I'll point out that reports show that a lightning strike can occur within 5 miles (8 km) of its originating storm, so it doesn't have to be raining for you get nailed, out in the open. But it did seem a little high-handed.

so--was there a storm in the end?