Three women left for what they thought would be an easy float down the Muskegon River in Michigan on Tuesday afternoon, but they ended up spending the night on the river bank, scared and yelling for help. The trio of young women were rescued 20 hours later after a fisherman eventually heard their cries, said Muskegon Township Deputy Fire Chief Bob Grabinski. The women, all in their 20s, had never been tubing before and decided it would be a fun thing to do, Grabinski said. 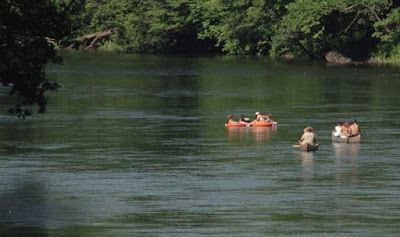 So they bought some tubes and headed to the popular launch site at the Maple Island Road bridge, Grabinski said. "They were informed by somebody at the bridge that the river goes in a circle and if they put in there they would come back to their car," he said. "Not knowing anything, they set off on their little adventure." About six hours later, with darkness closing in and their car nowhere to be found, the trio decided to get out on the riverbank where they ended up spending the night, Grabinski said.

"They said they hugged a tree all night yelling for help," he said, adding that that stretch of river is very isolated. At about noon on Wednesday a fisherman floating the river heard their cries for help, investigated and then called 911. The women, one from Muskegon Heights and two from Muskegon, did not have a phone with them, Grabinski said. Muskegon Township firefighters launched their 16-foot jet propulsion river rescue boat from the Holton Duck Lake Road launch ramp and found the women about a quarter-mile downriver, he said. 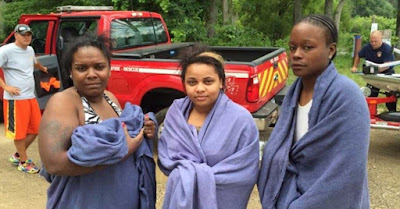 Dalton Township firefighters also responded with their boat in case it was needed. Other than a few bug bites and scratches, the women were fine, Grabinski said. He estimated they had travelled roughly 3 miles. "In their words, they're never going tubing again," he said. "My words are know the river or take someone with you who knows it and have a plan." No one reported the women missing, which brought Grabinski to a third piece of advice: Before heading out for an adventure, tell someone where you're going and what time you plan to return.
Posted by arbroath at 6:05 am
Email ThisBlogThis!Share to TwitterShare to Facebook

Several levels of personal and educational fail here. So much fail.

The river goes in a circle?

Y'know, never in a 1000 years must the guy who told these women that (it HAD to be a guy!) believed that they would take him up on it.

Also, if I'd just had that misadventure, I wouldn't be posing for a photo. Seriously.

The rivers that go in circles generally go down very deep dark holes not to reappear for a long time. These gentle fools are also rather lucky ones.

I hate practical jokes like this. Very passive aggressive.