A woman was surprised to discover that a potentially poisonous snake was clogging up her washing machine. Lisa Thatcher of Dover, Kent, had called out plumber Roy Wiley for the third time this week because her appliance kept flooding. 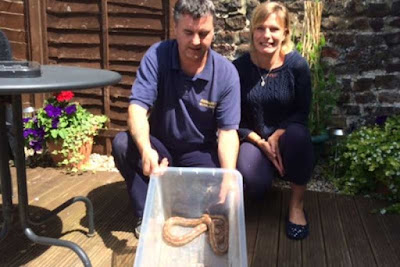 Baffled tradesman Roy, who couldn't find any blockage, was running out of ideas so he decided to get his Henry Hoover out. He said: "I thought I'll cut into the pipe and I just whacked my hoover in there. And I thought there's something there. The snake was just trapped in the middle and I thought what's that!" 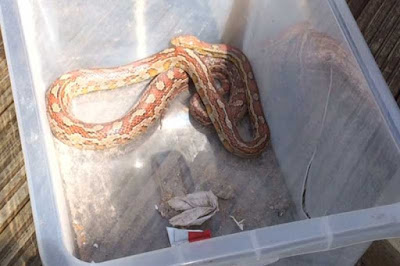 Lisa's neighbour, a neuroscientist, believes the red and orange marked snake to be an adder. Lisa said: "I was just working away at the table and Roy said: 'there's definitely a blockage.' All of a sudden he says: 'It's a snake.' I said what! I looked over at the washing machine. I could see the body of this snake, I couldn't believe it. I ran out of the way, sort of laughing, thinking that's not real!"

She, reckons the snake was at least five foot-long and said: "It's been a bit of a mystery, whether it's been the plumbing or the machine. I've recently been to Thailand and didn't have a snake incident all the time I was there!" Adders are the only venomous snakes native to Britain. Their bites are very painful and require immediate medical attention but pose little danger to a healthy human adult.
Posted by arbroath at 6:02 am
Email ThisBlogThis!Share to TwitterShare to Facebook

Snakes aren't poisonous (unless you eat one w. a venom sac) - they're venomous.

Not an Adder.
They claim it was about 5 feet.
Adders seldom exceed 2 feet.
The markings and head shape are not consistent with an Adder.

Best guess from the small pics and unclear video: Abbots Okatee Cornsnake or some type of Boa.
Neither of which are "poisonous."