Police were called to the Richmond Road Walmart in Lexington, Kentucky, on Saturday night after a witness noticed a car full of men in body armour holding semi-automatic weapons. A six-month old baby was also in the car.

Lt Jackie Newman said when police officers got the three men out of the car at about 11:15pm, they said they were preparing for Doomsday and needed supplies. The men were armed with pistols and semi-automatic rifles, police said. A licence is not required to have semi-automatic weapons in a car, police said. 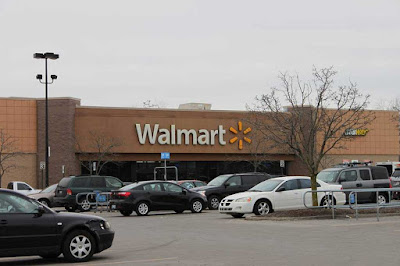 Police also found marijuana in the car. All three subjects voluntarily went down to police headquarters for questioning that night, said Lt. Richard Willoby of the Lexington Police Department. They were given a citation for the marijuana but were not charged with any other violations, and were later released.

Willoby said police took photographs of the car and the weapons in order to complete a report to the Cabinet for Health and Family Services because of the baby in the car. “There appeared to be nothing criminal,” Willoby said. “They’re in the mindset of preparing for the end of the world, accumulating weapons and things like that, but the weapons appear to be legally owned.”
Posted by arbroath at 6:04 am
Email ThisBlogThis!Share to TwitterShare to Facebook

Just because it is not illegal does not mean you should do it. jebus

Only in 'meica. Citation for the pot, but not for having lethal weapons.

Yup, leave it up to doomsday preppers at a Kentucky Walmart.

conspiracy theorists think there are hidden government FEMA caps under every Wal-Mart in the US--I would think they would have avoided it in this case.

It's a worry when they say the weapons "APPEAR" to be legally owned. Wouldn't you want to know for sure with weapons like this? Are you telling me there is no system/database/whatever that you can check for things like this so you know straight away?