A man who has had repeated heart problems has pleaded with the council to end the nightmare of seeds falling from nearby trees. Stanley Watts lives in Eves Orchard in Bures, Suffolk, in a Babergh District Council owned property. He has mobility issues following five heart attacks but still wants to enjoy being outside, and said he is being forced inside, despite the hot weather, as he can no longer face the bombardment of seeds coming from two silver birch trees.

Mr Watts said: “For the last two or three years I have been trying to get them to take the trees down. The seeds are coming in my door. I can’t go outside, I have to lock myself in. I’ve done everything, I’ve contacted the ombudsman, and my doctor said that she wanted them taken down. You should see how we are living here. They [Babergh] have completely ignored me. We are like shut in animals. It’s beginning to make me feel ill.” 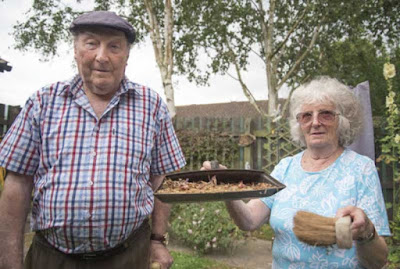 Mr Watts said the seeds got everywhere, falling into drinks and ruining any meals outside, with his mobility issues meaning he is unable to walk down to the local pub. He said the seeds even covered the bathroom and rooms inside the house if the windows were opened. A Babergh District Council spokesperson said: “Babergh is aware of Mr Watts’ complaint and has been working with him over the course of many months to try and find a suitable solution. The silver birch trees in question are outside of Mr Watts’ garden and are on public open space maintained by the council. One of their natural characteristics is to drop seeds for six to eight weeks of the year.

“We regularly inspect these trees to ensure they are not diseased or dying and, while we appreciate that the seed dropping may be causing considerable annoyance to Mr Watts, we do not believe the only solution to the problem is to remove two healthy trees. Instead we have offered to install magnetic fly screens over his doors and windows to stop the seeds entering his property and have offered to clear the seeds from his garden on a weekly basis while they are in that phase of their ecology – both of these Mr Watts has refused. Mr Watts then referred his case to the Housing Ombudsman for their consideration and Babergh accepted their offer to attempt to achieve an early resolution of this case. Unfortunately it appears they have been unable to do this and so will be undertaking a full investigation. We will continue to assist the Housing Ombudsman in any way we can.”
Posted by arbroath at 6:01 am
Email ThisBlogThis!Share to TwitterShare to Facebook

Mad old scrote. If that's a nightmare for him, it's no wonder he's had a heart attack.

Nightmare? It's nature. Why should the fact that he had an irrational hated off seeds be allowed to spoil others' enjoyment of nature. I don't hear his neighbours complaining, nor do I see how a hearty condition has any bearing on the issue.