A pub sign which used to read “It’s all about meat” has been altered in a bid to please disgruntled vegetarians in a County Durham village. Managers at The Victoria Inn, in Witton-le-Wear, near Bishop Auckland, decided to scrub away the last two letters of the noticeboard to appease offended non-meat eaters who raised their grievance in a village survey. Comments in response to a questionnaire, which sought the views of residents ahead of drawing up a Local Plan, revealed three people were offended by the sign.

Under the public houses section it said: “The logo ‘It’s all about meat’ (is) very off putting for vegetarians - three people mentioned this.” After reading the questionnaire’s results in local newsletter the Witton Word, published at the end of last month, co-managers Lucy Heslop and Tracy Hetherington made the decision to change the sign, which now reads: “It’s all about me.” “We thought about making it about the customer,” said Ms Heslop, who has been running the business since November. 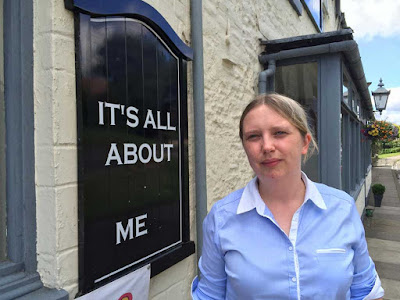 “I think it’s a great way to tell the customer it’s about them.” She added there were no hard feelings over the issue and the duo were happy to oblige any potential punters. “It’s important in a small village to find out what the locals think and make them part of the community,” said Ms Heslop. “A village pub is all about the community and you need to make the community feel part of it.” The original sign was a hangover from the previous owners who ran the business as a smokehouse eatery with a focus on meat products.

Witton-le-Wear resident and Witton Word editor, John Wheeler, said he welcomed the sign alteration. “A lot of people in the village are elderly and I don’t think they were into smoked food and lots of meat,” he added. “I think the questionnaire is very important and you’ve got to respond to it.” Since taking over The Victoria Inn, the managers have added four or five vegetarian options and have made efforts to offer a more “traditional pub” to local people. Mr Wheeler said: “The menu is 200 per cent better compared to what it was before.”
Posted by arbroath at 6:03 am
Email ThisBlogThis!Share to TwitterShare to Facebook

So if four meat eaters object to the sign being changed because three veggiementalists didn't like it, will it be changed back?