The dream of buying a home has turned sour for a man and his nine neighbours, after a legal mix-up left them owning the wrong property. The astonishing blunder has created a legal nightmare for Chris Meyer, who has discovered his three-bedroom apartment at Willow Court in Carlisle is owned by his next-door neighbour. To his horror, he has been told that six years ago he unwittingly bought the flat next door to the one he has been living in. Ten of the 15 flat owners in the building are facing the same problem. However, the remaining five flats are unaffected - and the deeds correctly relate to the properties and their owners. Chris, 30, had hoped to sell his flat and move into a bigger house with a garage and a garden, but that has proved impossible.

Lawyers say none of the flat owners can sell unless they get the written agreement from everybody involved to swap properties, but three years after the problem came to light some owners are still to be traced. Burnetts, the Carlisle law firm that dealt with his purchase of Chris’s apartment, say it was his responsibility to check the relevant documents. But Chris, who runs Cumbria Leather and Glass Restoration, said: “I’m totally and utterly stuck. My girlfriend and I want to move to a bigger house, so I put the flat on the market three years ago for £80,000. I had loads of interest and an offer of £76,000. I’d chosen the new house, had the mortgage approved, a survey sorted out, and I was due to get the keys in a few weeks when the solicitor for the person buying my flat got in touch to say there was a problem. 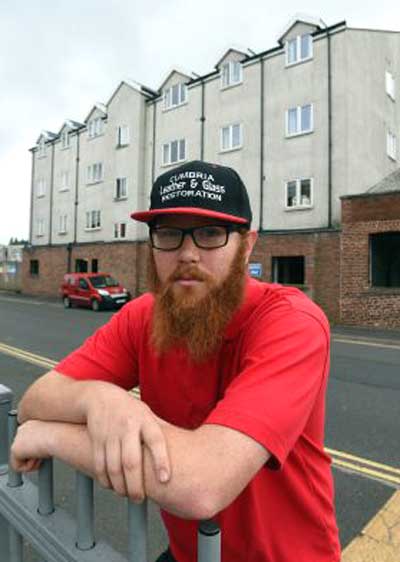 “Basically, I live in number 8 and thought I had bought number 8. But Land Registry documents show that I actually own Number 9. The man who thought he’d bought Number 7 actually owns my flat. It’s the same for 10 of the 15 flats. It’s a complete mess. Not surprisingly, my buyer pulled out. We’re three years on and we seem to be no further forward. Burnetts have tried to sort it out but got absolutely nowhere. The Land Registry people say they need every owner’s approval to rectify the problem. Burnetts have tried to get in touch with the five people on my floor. They’ve had only one response and no response from the other owners. Some of the flats are rented out, including the one next door that I own. The owners appear to be ignoring letters, and there seems to be nothing I can do.” Chris had contacted Carlisle MP John Stevenson, who he said has promised to contact the Land Registry to see if a solution can be found.

In the meantime, his plans for the future are on hold. Chris added: “I want to move on with my life. This should never have happened. Burnetts have said that it was up to me to check the documents but I paid them to do the conveyancing so that nothing like this would happen. That’s why you get a solicitor for these things. I just want somebody to fix this problem.” Nick Gutteridge, a managing partner at Burnetts, said: “We are very clear that responsibility for checking the title report was with Mr Meyer. Although this is not a situation of our making, we have gone above and beyond in helping Mr Meyer to rectify the issue, including liaising with other property owners and their lenders. Given the many hours which have been spent (at no charge) in trying to assist him, it is disappointing that Mr Meyer has chosen to raise a grievance via the newspaper. We have previously encouraged Mr Meyer to seek independent legal advice and do so again. In the meantime, we are willing to continue to help, if he wants us to do so.”
Posted by arbroath at 6:03 am
Email ThisBlogThis!Share to TwitterShare to Facebook

Leave it to a lawyer t try to weasel out of his mistakes and pin it on the victim!

Just switch the number on the doors