A man and woman were arrested in connection with the unusual theft of hammocks from a south Minneapolis park, apparently with the help of a blowtorch, authorities said.

Andrew Sobaski, 28, and Johnna Vanguilder, 27, were charged with first-degree robbery in the July 31 incident in Triangle Park. Sobaski is accused of stealing the hammocks and threatening people with a blowtorch, saying he was going to "burn your faces off," according to a criminal complaint filed in Hennepin County district court on Friday. 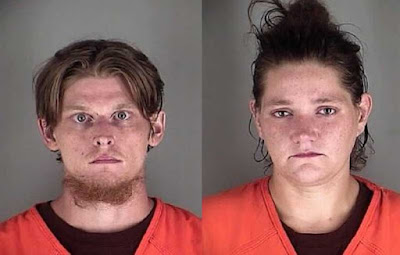 He remains in jail in lieu of $100,000 bail, with a court date of Sept. 27. Vanguilder, who also remains jailed, is scheduled to appear in court the following day. "Victims, a group of friends, were in Triangle Park with when they were approached by a man bearing a blowtorch who said he was going to 'burn your faces off,'" the complaint read.

Police say that the blowtorch-wielding thieves burned "the ropes suspending" the hammocks before fleeing with their haul, which included the hammocks, a Starbucks gift card and bug spray. The pair were arrested four days later when a neighbour recognised them from a blog post about the incident.
Posted by arbroath at 6:05 am
Email ThisBlogThis!Share to TwitterShare to Facebook