Needle exchange director arrested for being in possession of needles

The director of the Cincinnati Exchange Project was arrested with needles and supplies on Friday in Norwood, and was jailed overnight. Elizabeth "Libby" Harrison was released at about 6am on Saturday and appeared in Hamilton County Justice Center for an initial hearing before Hamilton County Municipal Court Judge Joshua Berkowitz. She pleaded not guilty to drug paraphernalia charges. Overnight on Friday, Norwood Police officers found Harrison’s car pulled off to the side of a local road. Harrison said she was tired and fatigued. Norwood police Chief William Kramer said officers found Harrison "passed out in the driver's seat with her car still in drive." According to the Norwood police report, officers observed a syringe cap in Harrison's lap and a bag in her pocket eventually found to contain white powder residue.

A search of Harrison's vehicle also revealed a bottle cap and a piece of burnt cotton, and both a capped and an uncapped syringe, police stated in their report. The white powder residue, which Harrison dropped to the ground after emerging from her vehicle, will be tested, Kramer said. Drug possession charges are possible pending the outcome of those tests, Kramer said. "There was no bag with white powder in it," Harrison said. "If they tested anything in the car, it’s going to have heroin in it because of (my) work." Harrison's car was filled with thousands of syringes in plastic bio-hazard bins, but no actual drugs, she said. Harrison also said she conversed politely with police, offered to show them her official identification cards, but ultimately was arrested and jailed. "I have hypoglycemia so I get lightheaded. I pulled over to the side of the road, ate a peanut butter-honey bar and waited for it to take effect," Harrison said after her hearing. "The next thing I know there's cops everywhere." 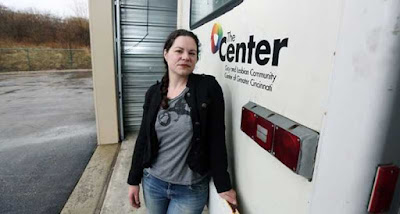 CEP, as it's called, is a mobile exchange site that generally operates from a van that clearly identifies its purpose. But the van occasionally has mechanical problems, so staff work from their own vehicles so as not to interrupt services. That's why, according to Harrison, there were needles and other supplies in her vehicle. "If I'm carrying 1,500 needles and giant sharp (needle) containers, I'm obviously running a programme," Harrison said. "There was no reason for them to take me to jail. For them, maybe it was a better-safe-than-sorry situation, but I think they should have thought about it a little longer." Kramer noted needle exchange programmes are typically very organised and Harrison's involvement in a such a programme doesn't exempt her from proper handling of the instruments she deals with. “If she simply had capped needles she was transporting… that didn’t appear to be the case,” Kramer said. “I don’t know that anybody in a needle exchange programme would have an uncapped needle.”

Harrison said that her car was untidy at the time of her arrest. At least one expert, who spoke without knowledge of the Norwood Police Department's reports, said Harrison shouldn't have been arrested or jailed. "This is really outrageous," said Dr. Judith Feinberg founder and medical director for the needle exchange programme. "She should not have been arrested," said Feinberg, who is now a West Virginia University professor. "The syringe exchange is legal." Feinberg said the exchange programme has "gone through all the appropriate approval processes" to operate. Feinberg said the staff generally have phone numbers with them to call police if any incidents arise during the exchange. Even so, she said, "In the two years we have operated, there has never been a problem, never a need to call police." The project has been operating since 2014, offering to its clients an exchange for clean needles, infectious disease testing, resources for addiction treatment and, when available, naloxone, the life-saving opioid and heroin overdose antidote.
Posted by arbroath at 6:05 am
Email ThisBlogThis!Share to TwitterShare to Facebook