A prankster has been targeting letterboxes around Blenheim, New Zealand, dropping off cardboard muesli bars in an unusual spree which has lasted more than a year. The motives of the perpetuator remain unclear. Inside each of the wrappers, which have been meticulously resealed with glue or sellotape, residents have been bemused to find a roll of cardboard. Paul Negrerie, a French winemaker working in Marlborough, said he first encountered the misleading muesli bars in January.

"I picked it up from the letterbox and thought, 'sweet, a free muesli bar,' but when I opened it up it looked weird," he said. "I thought it was an advertisement for a muesli bar or a gift, but it was just cardboard." His former flatmate, Dom Chan-Roberts, said the hoax bars were being dropped off before he moved into the house last August. The first time he encountered one Chan-Roberts put it down to the fact one of his flatmates might have asked for a nutritious snack from a workmate. It was not until a packet of cigarettes was dropped off, presumably by the same person, that he realised the persistent efforts of the prankster, which involved a bar being dropped off in the letterbox every few weeks. 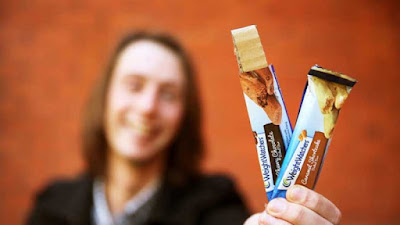 The packet contained a bunch of hand-rolled cigarettes taped onto Marlboro brand filters and painstakingly filled with grass. "They had gone to extreme lengths," Chan-Roberts said. "It's a good laugh, but if they've got this much time on their hands, they should be doing something more productive." Other Blenheim residents have also reported strange bars left in their letterboxes. University of Otago associate professor Martin Sellbom, from the Department of Psychology, said: "Given it has been going on for quite some time, there seems to be some form of incentive or reward that the person or persons doing this are getting from the behaviour.

"What that is I have absolutely no idea, there's no scientific research that would point to particular issues." Blenheim police community constable Russ Smith said the issue had not been brought to his attention, but said he would be happy to talk to anyone if they had concerns. However, he said it was uncertain whether the behaviour was actually illegal. "If they were trying to defraud someone or poison them, or if they were stealing the bars then that would be criminal. But it could just be a 7-year-old kid who thinks it's a laugh. It seems a bit weird."
Posted by arbroath at 6:03 am
Email ThisBlogThis!Share to TwitterShare to Facebook