Residents warned about scorpion on the loose in Manchester apartment block

A scorpion is in the loose in a Manchester city centre apartment block. Experts say the Emperor scorpion probably entered the Century Buildings inside someone’s holiday luggage. Householders are now being warned to be careful where they step after a horrified mum found the creature ‘scuttling’ across her kitchen on Monday night. Emma Chadwick’s son Cyrus, 19, discovered the arachnid in the kitchen of their flat at 11.30pm. 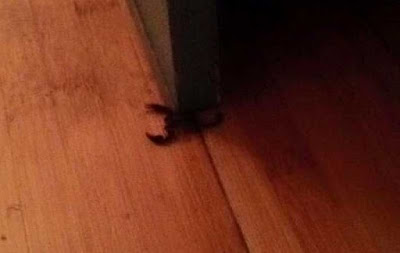 Shocked by the discovery, Emma called the building concierge who tried to grab the scorpion before it raced beneath a kitchen cabinet. And when an RSPCA officer came out to capture the animal on Tuesday morning she was unable to find it. Residents have been advised not to approach the scorpion if they find it in their home, unless they can ‘cover it with a tub’. Emma said she has been told it is unlikely the creature has moved out of her flat and is now elsewhere in the building, which is just off St Mary’s Parsonage. She said: “I was getting ready for bed when my son came rushing in saying there’s a scorpion in the kitchen.

“We were completely stunned and didn’t know what to do so we ended up calling the RSPCA and the police. The brave lady from the RSPCA came and took the skirting boards away but couldn’t find it. She said there is no nest so hopefully it’s just the one. We were told to put flour down so they could track it’s movements if it came back out. I think the biggest danger is if someone treads on it by mistake. I think it’s more scared of us than the other way around but it’s still not something you want scuttling around. It’s made everyone very twitchy.” A letter sent from the concierge to Century Buildings residents warns them not to handle the creature. 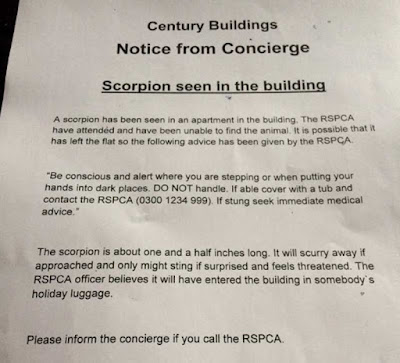 It reads: “A scorpion has been seen in an apartment in the building. The RSPCA have attended and have been unable to find the animal. It is possible that it has left the flat so the following advice has been given by the RSPCA. The scorpion is about one and a half inches long. It will scurry away if approached and only might sting if surprised and feels threatened. The RSPCA officer believes it will have entered the building in somebody’s holiday luggage.” Residents are being warned not to handle the scorpion if found but should instead cover it with a tub and contact the RSPCA. Anyone stung by the creature should seek immediate medical advice.
Posted by arbroath at 6:01 am
Email ThisBlogThis!Share to TwitterShare to Facebook