Candlelight vigils took place in several towns across Sweden and Norway on Saturday night for dogs killed by wolves. Evening marches were held in the towns of Torsby, Ockelbo, Uppsala, Mora, Jönköping, and Nora, all of which are places where hunting is a popular sport.

“It's a problem that is just getting worse and worse,” Sofie Rockmyr, from Torsby, a small town close to the Norwegian border, said. “It's about a lot more than just hunting dogs, it's also pets and livestock.” The group held a minute's silence for the dogs that had been killed. 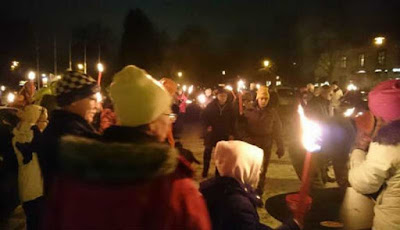 Rockmyr said that although her own hunting dogs had so far escaped unscathed, several of her friends had lost animals to wolf attacks. “It's always something you're afraid of,” she said. “I know lots of people whose dogs have been killed, and also dogs that have survived after being attacked by a wolf.” The protesters were calling for the issue of permits to hunt wolves in the area, in a move to bring down the population.

Sweden this year issued a temporary ruling allowing 14 of the country's then estimated 400 wolves to be killed between January 2 and the end of the hunting season on February 15th. Sweden's Environmental Protection Agency in June estimated that the wolf population has now fallen to around 340. Rockmyr said that allowing hunting would not only reduce the problem of wolf attacks by cutting numbers, but also by making wolves more fearful.
Posted by arbroath at 6:02 am
Email ThisBlogThis!Share to TwitterShare to Facebook