Three cows have been left stranded on a raised island of land, surrounded by collapsed earth from landslides near Kaikoura.

The two adult cattle and a calf were stuck on the small island of grass amidst chaos, after the 12.02am 7.5 magnitude earthquake shook much of the country. 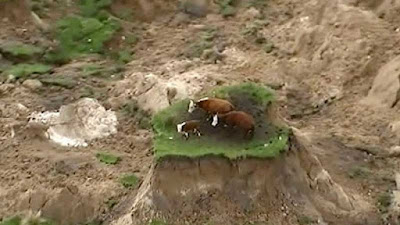 The patch of grass was surrounded by deep ravines of collapsed earth, trapping the animals where they stood.

It is not clear who owns the cattle or what was being done to help them. Kaikoura is close to the epicentre of the earthquake, and where one of two confirmed deaths occurred.
Posted by arbroath at 6:04 am
Email ThisBlogThis!Share to TwitterShare to Facebook

These cows were rescued