Elderly man recovering after being attacked by his grumpy goat

An elderly man was taken to hospital with dehydration after being attacked by a goat in Australia's Gold Coast Hinterland on Friday morning. The 73-year-old man suffered abrasions, grazes and dehydration after “struggling and fighting” with the goat for some time, a Queensland Ambulance spokeswoman said. It is believed the man was attacked by the goat during his morning walk.

Paramedics were called to the Panorama lookout at Tallai about 5.30am after the victim raised the alarm, reporting that a goat with large horns was ramming him. The man held it in a headlock and screamed for help from neighbours. It is understood the struggle between the man and the goat lasted for about an hour. Queensland Ambulance Service then required police assistance on the job because of the size of the wild animal, which fled the scene. 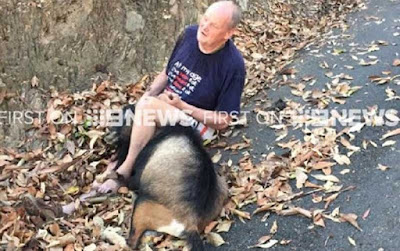 A QAS spokesman said “The man was charged at by the goat and then wrangled it and held on to it for close to an hour, he was afraid if he let go it would charge again. He was yelling out to his neighbours for help and luckily someone heard and called for help,” he said. “It was already quite hot at that time in the morning and he was tired and dehydrated after the ordeal.” Advanced care paramedic Stuart Cutajar said the man was “very shook up” by the incident.

“He can see the light side to it but he’s very dehydrated and exhausted after the incident,” he said. Queensland Ambulance Service required police assistance on the job because the large animal decamped on hoof. The man had been given the goat as a gift a matter of weeks ago . His friend gave him the goat to “mow his lawns” for him on his property in Tallai. The man was taken to the Gold Coast Robina Hospital in a stable condition. The rogue goat has now been seized by the Gold Coast City Council, which will be investigating the incident.
Posted by arbroath at 6:03 am
Email ThisBlogThis!Share to TwitterShare to Facebook